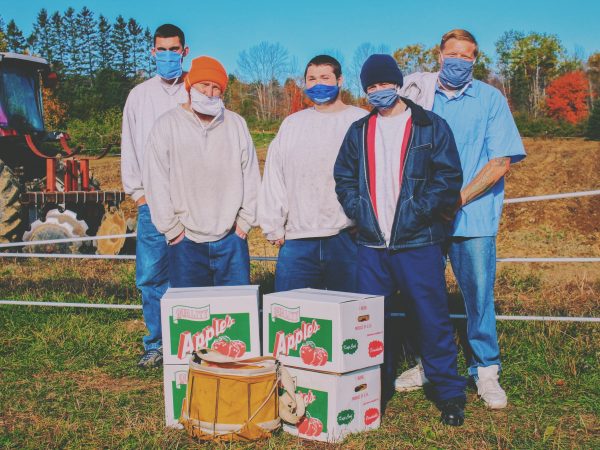 In Maine, inmates are growing vegetables and making meals from scratch to replace the deadly diets they have long been served.

Ms. Brown, a former reporter for The Times, writes frequently on incarceration and the challenges of re-entry.

Of the seemingly endless tally of injustices of mass incarceration, one of the worst humiliations gets little attention from outside: the food. This shadow issue — the 3,000 bologna sandwiches, mystery meats slathered on white bread, soy filler masquerading as chicken and other culinary indignities consumed during a prison sentence — permeates life behind bars and instills a nearly universal sense of disgust.

Prison food is high on refined carbohydrates, sodium and sugar and low on nutrients — diets the rest of us have been told to avoid. Like everything about prisons, it disproportionately affects people of color, and it has grown worse during the pandemic. With most states spending $3 or less per person a day for meals, penitentiaries have become hidden food deserts, paralleling the neighborhoods from which many inmates have come.

The “hidden punishment” of food is the subject of a comprehensive new report by the research and advocacy organization Impact Justice. “Food is a fundamental human rights issue,” said Alex Busansky, the organization’s president and founder. “It’s not just one bad meal or experience, but years and years and thousands and thousands of meals.”

At the Mountain View Correctional Facility in Maine, however, an organic farmer with dirt under his fingernails and reform on his mind is demonstrating a new path, making the prison a pioneer in a nascent farm-to-prison table movement. “It would be a whole lot easier to just go ahead and throw on some chicken patties,” said Mark McBrine, the facility’s food service manager, who comes from generations of farmers. “But by putting time into it and cooking from scratch, we can provide much healthier and better-quality meals that save money and benefit the well-being of residents and staff.”

This medium- and minimum-security prison has a 750-tree heirloom apple orchard and a three-acre vegetable farm. The inmates cultivate and harvest crops, learn to prepare healthful meals from scratch and bake virtually all the prison’s rolls, breads and muffins. For what they don’t grow, Mr. McBrine aggressively courts fellow farmers and other local sources, scoring significant “opportunity buys” — from surplus organic mushrooms to multigrain stone-milled flour.

Early in the pandemic, when local suppliers were overflowing with food for shuttered restaurants, Mr. McBrine snapped up 45 free-range turkeys at 59 cents a pound and prepared a full Thanksgiving-style dinner in March with all the trimmings, followed by his grandmother’s recipe for turkey potpies with biscuit toppings.

On a chilly autumn morning with frost on the clover, a few inmates harvested the last of the season’s 77,000 pounds of apples (the surplus goes to other prisons and food banks). Like prisoners everywhere, they had strong opinions about standard-issue fare. “Consider eating ground-up gym mat with a little bit of seasoning,” Alexander Roth, 34, said about a typical meal at a county jail.

Before Mr. McBrine took over six years ago, inmates at Mountain View would routinely chuck their food trays in the garbage. This is typical, according to the Impact Justice report. The organization’s survey of 250 former prisoners found that many did not receive enough food and contended with soured milk and spoiled meat.

Food quality, or lack thereof, has a direct impact on behavior, notes Jeff Morin, Mountain View’s warden. “This is not a healthy population due to some of the lifestyles they grew up in,” he observed. “If they don’t feel good, they’re not going to act good.”

The issue, though, goes way beyond fostering good behavior. Though the average American rarely spends time worrying over how incarcerated people are being treated, their physical, psychological and emotional health has a ripple effect on all of us, especially after they serve their time. If the goal of prison involves not only punishment but also rehabilitation and lowering recidivism, then sending a healthier person back into society is in everyone’s interest.

“Mark teaches them the science and health values behind what they’re doing,” Mr. Morin said. “So when they leave they have a knowledge base that they can utilize in the community.” Over the last five years, more than 25 of Mr. McBrine’s “graduates” have landed full-time work at a large commercial bakery.

In Maine, the enlightened approach comes from the top: Randall Liberty, the state’s corrections commissioner, is a certified master gardener and beekeeper. He is also a former inmate’s son and grew up in a trailer on public assistance and ate molasses and biscuits for dinner when money was tight.

When he was warden at Maine State Prison, Mr. Liberty instituted composting after learning, to his horror, that leftovers from the 3,000 meals served a day were being thrown away. The composting saved $100,000 annually and enriched the soil where a two-and-a-half-acre vegetable garden now flourishes. He also installed beehives “outside the wire” periphery that he initially tended himself (inmates now care for the hives throughout the system). Prisoners can become certified master gardeners or beekeepers through the University of Maine’s cooperative extension.

Arthur Robinson, 63, who was incarcerated for 40 years in California, considered the food a plus when he arrived in the 1970s, recalling a fresh half-chicken or menudo (a traditional Mexican soup made with cow stomach) for dinner. That changed when the “tough on crime” policies of the 1980s precipitated a sevenfold increase in the state’s prison population. “They got dietitians to say, ‘This is what a person needs to survive, right?’ They didn’t take into account feeding the people. So you were getting the bare minimum,” Mr. Robinson said.

Sam Lewis, executive director of the Anti-Recidivism Coalition, an advocacy network, performed a grim science experiment on one prison’s prepackaged lunches: watering the chemical-smelling bread to see if it would develop mold (it didn’t) and trying to get the cheese to melt (it wouldn’t).

The public health ramifications of a poor diet are profound: Incarcerated people suffer from higher rates of costly chronic conditions, including cardiovascular disease and diabetes. “Lifestyle changes are a significant tool for these conditions, and diet is a huge part,” noted Dr. Shira Shavit, a professor at the University of California at San Francisco School of Medicine and the executive director of the Transitions Clinic Network, a constellation of 44 health clinics for formerly incarcerated patients. In addition to a lack of daily fresh fruits and vegetables, Dr. Shavit pointed out that in prison, “people don’t learn needed skills about healthy eating because there are very few food choices.

“It’s a missed opportunity,” she continued. “It’s yet another example of how we don’t prepare people to come back to the community.”

Yet even beyond Maine, the culture is changing, albeit at glacial pace. At the Noble Correctional Institution in Ohio, for instance, the desire to foster positive family visits led officials to organize a cookout so that inmates and their families could grill and share a meal together. The prep, eating and cleanup “symbolize the effort involved in any healthy relationship,” said Tim Buchanan, the former warden.

And in Maryland, the nonprofit Farm to Prison Project is piloting a program with the Maryland Institute for Women to replace standard canned and frozen fruits and vegetables with fresh locally sourced produce.

Peter Allison, the executive director of Farm to Institution New England, a six-state network that helps to create markets for farmers and fishermen through institutional procurement, said the pandemic prompted a shift in thinking. Many schools and colleges, long regarded as steady sources of income, have closed temporarily. Correctional institutions, Mr. Allison noted, can potentially play a vital role as stable outlets for farmers, fishermen and other producers.

Improving the health of incarcerated people through more palatable and wholesome food will mean bringing together farmers, chefs, corrections officials and legislators as well as people who have lived behind bars. There is just one missing ingredient.

“It’s really a question of political will,” Mr. Allison said.

Patricia Leigh Brown, a former staff reporter for The New York Times, writes on culture and community for The Times and other publications.