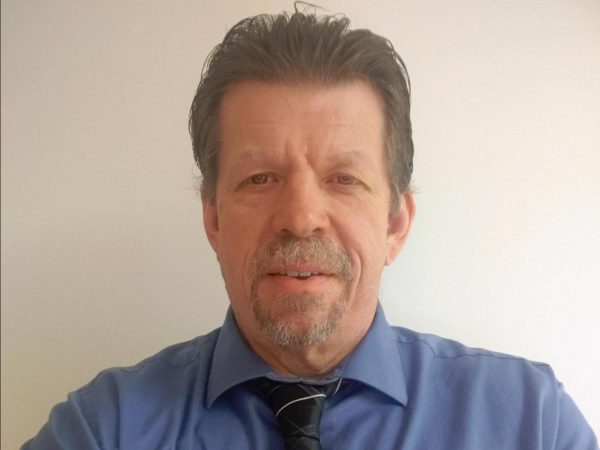 Bio
Russell has over 29 years experience in Corrections. He lives with his wife in Northern California. He has a son who is a realtor in Washington state, a step son who is a police officer in Nevada and a stepson on active military duty with the United States Navy. He offers his knowledge and experience on Facebook with Keepers of Kaos facebook group and Tier Talk with Anthony Gangi where he has several hundred free videos. He hopes to continue to have an impact on not only his work now with helping in reentry for ex-inmates but with other Correctional Officers.

“It takes its toll, so you really have to be that constant gardener of your own life and try to work through those things for your own sake.”

I have worked over 29 years as a Correctional Officer. I started my career in the late 80s with the California Department of Corrections and Rehabilitation–except, at the time, it was just Corrections, no rehabilitation involved at San Quentin State Prison. I worked there for many years, including on death row and some of the higher-level facilities, such as the adjustment center and a few others. And then, eventually, I transferred to another California state-run prison, SCC, in the Sierra foothills. Eventually I was promoted to Sergeant, and after a while I decided it was time to retire. But it didn’t take very long to figure out that retirement wasn’t for me.

I went back to work in Tuolumne County as a Senior Juvenile Correctional Officer at a brand new facility. It was the first time I had ever dealt with detention for juveniles, and I stayed in that job for two years. I now work with a company that specializes in rehabilitation and re-entry, for people on probation, trying to get them to think differently about their life so that they change their ways.

Becoming a Correctional Officer wasn’t always a goal of mine, but, at the time, I needed a job, and the California Department of Corrections was hiring. That first year was pretty rocky for me, but then it was as if a light bulb went off in my head. Not only did I get better at doing my job, but I also came to love it. I don’t think the public really understands what we do as COs, and I think they have a lot of misconceptions about the job. Our number-one function is actually public safety. I just wish people could look through my eyes to see how hostile, dangerous, and dirty our situation actually is. The job is not always about using force; in fact, it’s very mental in that it requires being able to read body language, read the inmates’ emotional state, and then be able to communicate, especially when you’re trying to de-escalate a situation. Most people think of us as some kind of babysitters; they don’t really give us the kind of recognition I think we deserve. Especially for the toll it can take on us.

One of the biggest issues is the hypervigilance the job creates for many Officers. I have found myself, when I’m not at work, trying to pay attention to everything going on around me, reading into things as I observe people’s behavior that wasn’t necessarily true. When I go to a restaurant I always pick a seat where my back is to a wall, and my family knows that. I’m always watching, always at attention, unable to relax and enjoy the meal and time with friends or family as a normal person would. All of that stems from the repeated little stresses and critical incidents you need to respond to on any given day on the job. People say you should leave the job at work but it consumes you, and it’s not something you can just turn off.

When you go through multiple traumas, having to use force or defend yourself or ending up in the hospital because some guy sucker-punched you and tore part of the cornea out of your eye or threatened you or your family, those things build up. It’s a little bit like Chinese water torture–a kind of drip, drip, drip that builds up over time. It takes its toll, so you really have to be that constant gardener of your own life and try to work through those things for your own sake.

I’m always focused on trying to make myself better physically and mentally, and I believe that having a healthy lifestyle is one of the best things you can do to keep yourself emotionally fit. You really have to develop mental resilience to get past everything you need to endure, and not everyone is able to do that. Someone may have seen or been involved with a thousand bad things inside the prison, and then something goes wrong in his home life and he thinks the solution is to drink. Sadly, there are officers who resort to alcohol or drug abuse, and also a high instance of suicide. Between family members, guys I’ve known at work, and guys I know of at other prisons, I’ve personally known well north of 25 to 30 people who have committed suicide. It’s hard, because you don’t think it can happen to you or your friends and then the next second they’re gone.

I’ll never forget the first time someone I knew from work took his own life. I was working at San Quentin, and one of my buddies told me that this particular officer had committed suicide. I told him that wasn’t possible. The guy was just here. And he said, no, he rented a motel room because he was on the outs with his wife, and he hanged himself. Well, I said, that’s terrible, but I guess it happens. I’ll never forget it. Then my buddy said “No, you don’t understand. It happens to a lot of us”. I’ve heard that at Pelican Bay State Prison, which is one of our institutions, say they had five staff suicides in one year. It can be a lonely career, because you go through it with only the buddies around you really knowing exactly what it’s like once you’re within those steel and concrete walls.

It’s not easy, because in our job, there is no chance to show any kind of vulnerability–physically, mentally, or emotionally. If you asked me on even the worst day of my life how I was feeling, I’d tell you I’m fine. I’m fantastic. I have no problems. I could be dying and I’d still be telling everyone, Hey, I’m fine. We’re really good about covering up. So it’s hard for people to reach out and ask for the services that are available. One thing that’s helped are the Employee Assistance Programs provided by some facilities, because they are completely confidential. But even then, just asking for help creates a stigma in the mind of the person who wants to think of himself as indestructible. Accepting the idea that you are, in fact, vulnerable can be a sobering experience.

So, for whatever reason, I’ve seen guys lose their jobs. I’ve seen guys get in car wrecks. People end up with all kinds of marital problems. (I myself have two divorces under my marital belt.) And some get involved with domestic violence that has cost them their job, because if you have any domestic violence in your past or present you are not allowed to possess a firearm.

I’m aware that many COs suffer from PTSD, but I don’t think I do. What I do know, however, is that sometimes, if you approach me in the wrong way or get in my space, I might respond instinctively and you could end up on the ground. It’s happened a couple of times, not too often, but it has happened. And I know there are times when, if I don’t watch myself, I can be quick to anger, and not only with my family or friends. I might just be reading something on social media and be too quick to respond. When you’re spending 16 hours a day dealing with nothing but danger, you can develop hair-trigger reactions.

I also know that I sometimes seem less approachable than I really am, which is too bad, because I actually like talking to people. I like to make new friends. But sometimes there’s a part of me that apparently keeps people at a distance just because of the way I look at them. Friends sometimes say, “Hey, Russ, you have that look,”and I don’t even know that I’m doing it. Subconsciously, there’s a part of me that keeps people away because of the hard veneer and hyper-vigilance I’ve developed from work that I find it hard to turn off. There have been times when I’ve probably said things to people I love that I just shouldn’t have said. Sometimes having that hard veneer serves you in one capacity but not in another.
I try to make myself vulnerable to the right people, such as my wife, my mother, and my kids. They’re the ones who get to see the side of me that’s not a Correctional Officer. I hope that my family always views me favorably, even though I also know that’s not possible, no matter what kind of a human you are. But, for the most part, I don’t think we have any serious issues, perhaps because I’ve worked at it hard and I’ve also made the conscious decision not to separate home and work. I don’t try to keep those things separate.

I just try to be myself, but I also try to be the self I’m supposed to be at that moment in time. I talk candidly about what’s going on at work, and my wife and I always let each other know how much we love each other.

I’m enthusiastic about the profession now; I’m enthusiastic about what I’ve done. As I’m helping with re-entry and rehabilitation from the probation side of things,I would never have thought of myself as wanting to do something like that. I was always on the safety and security side. I was always the guy making weapons and dope busts and going in there and dealing with riots–things like that. Now I help hardcore criminals and junkies to brighten and turn things around in their life. I help them change their ways so that they don’t have to go back into the system. I help keep them accountable, and they love and respect that. I do stay in touch with my fellow CO brothers and sisters through social media making sure they are safe and professional.