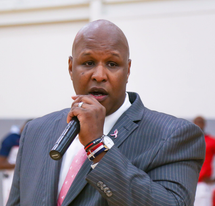 Bio
Jerome, grew up in Baltimore, worked in Corrections for over 12 years. Started out as a Marine and with family in law enforcement, Jerome felt the experience he had helped him be a better Correctional Officer. He is still active in the CO community and helps share his experience and wisdom from his career to others new or old.

“Captain once told me “Society may often forget about the gatekeeper known only as a Corrections / Detention Officer, but what would society do without him or her at the gate.””

I started my Correctional career at the federal detention center in Brooklyn, New York, where I worked from 1994 to 1997. From there, I went to the U. S. Immigration and Naturalization Service, which is now known as Immigration Customs Enforcement, as a detention officer. I worked there from 1997 to 2000. Next I went to the North Carolina Department of Corrections from 2004 to 2006.

Before becoming a Correctional Officer I was a Marine. In fact, three days after I graduated high school, I was in boot camp. I loved the brotherhood of the Marines, and I also learned a lot that had me in good stead ever since.

In addition to what I learned in the Marines, I have family members who were incarcerated, and I think that what they had to tell me also helped me as a Correction Officer. One of my uncles who did seventeen years told me that, no matter what they’ve done, everyone is human. Don’t look down on anybody. Don’t worry about what they did. Just do what you have to do. Follow policies and procedures and you’ll be fine. I  have tried to follow that advice and be that type of officer.

When I got to my first job in Brooklyn, I treated everybody as a human. And I think that has worked for me, because I haven’t been in many fights with inmates –maybe four or five in my entire career. I think that, as a Correction Officer, you have to set the tone. I’ve been around motorcycle gang members. I’ve been around Chinese gang members, black gang members, Hispanics, and I treated them all the same. I’ve even had inmates tell me that they respected that about me and how I did my job. One guy said, “I don’t talk to black guys. I don’t talk to black COs, none of that. But you came at me as a man, and I’ve got to respect that regardless of what I’m into or what I believe.”

A captain once told me that if you go in, do your job, be fair, firm, and consistent, you won’t have a problem. If you treat everybody the same way, you’ll be fine.  And when I became a supervisor, that’s what I told my officers.

That captain also told me this, and it always stuck with me: “Society may often forget about the gatekeeper known only as a Corrections/Detention Officer, but what would society do without him or her at the gate.” As CO’s, we don’t general get the attention for the dangerous job we do.

The first day I walked into the federal detention center in Brooklyn and that door closed behind me, I admit that I was scared,  because I realized it wasn’t going to open again until I got off duty. I grew up in Baltimore, so I already had some street smarts, but I think that being in New York made me tough. You need to be tough if you’re going to work in a jail, but you need more than that. You have to give respect to get respect.

You also have to be up on what’s going on in the community and in the world,–not just in the jail– because the inmates definitely do. Some of the inmates watch the news all day. They know what’s happening on the outside, and it affects the jail. You may try to hide it, but you really can’t. In a federal prison, the inmates get newspapers in many different languages, and what’s going on in the news can affect them. So, for example, they knew when the rapper DMX and Kobe Bryant died, and maybe one of them was a huge Kobe fan. They get riled up and heated. Tensions begin to rise as they are having feelings on top of being locked up without outlets to express themselves.

Or you might have to tell someone they need to call home. They call, and it turns out someone has died. Meanwhile he’s locked up and he can’t be with his family. In one case, I had an inmate whose mother died in a car accident on her way from Virginia to North Carolina to see him. He was devastated. He was on suicide watch after that, and I was the one who had to stand there while he got that phone call. You have to have empathy in those situations. Empathy not sympathy because it can get you entangled in their world and that can come home with you or get you in trouble. People’s children have died. I had one inmate whose children’s mother had a boyfriend who killed his baby. Not all Correctional Officers have empathy towards that. And I think in at least some cases it has to do with race. I hate to say it, but some white officers, not all, I’ve known couldn’t deal with black inmates. Being in the Marine boot camp was a lot like being in jail, so I know what that feels like and I try to empathize with the inmates’ situation.

Also, when I’m not at work I don’t try to be a CO. I hold the door for people, regardless of their race. I say, yes sir. No ma’am. If someone says something to me that’s disrespectful, I’m not going to take that because I get that kind of trash talk all day on the job. It takes a lot to get me so mad that I’m going to get into a fight. But if you try to put your hands on me, we’re going to have an issue. Especially since being in a NY facility got me hardened. It’s hard not letting work slip into your personal life. I’ve had my moments but been blessed with people who told me what it was gonna be like. My therapy is in sharing my stories with my friends and families. I get to release and let go of the tension and share my world.

COs need to be taught how to separate their home life from their work life, and how to get help when their job is getting to them. When that happens, You need to reach out to employee services or somebody on the job you respect. Some COs are very private. They aren’t going to ask for help. But then they need to confide in a friend, maybe someone who started the job at the same time they did, or maybe even a family member. Everyone needs to decompress. When it’s your time off, take your time off.  You need to have a life. Have a day off. But some people go home and want to act like they’re at work. I was lucky. I got a lot of training outside of the program from being a Marine and having a lot of family who had been in jail.

A lot of COs don’t have that. They may have read the book and taken the tests, but they need some realistic training. They need someone like me, someone who’s worked in the system for twenty or thirty years,  to come in and say, “Hey, I worked on every level of Correction. This is what you might see. This is what might happen. This is what it’s going to be like.” We also don’t have the support of therapists and extra Human Resources in our departments to help with the mental health aspect. And we also need more physical training tied to being able to defend ourselves. Not every CO has been in a fight, and they need to learn how to think on their feet. I’ve seen a lot of COs get hurt and the better we are educated, the safe and better we can do our job.