Impermanence and the Transitory Nature of Food as Art 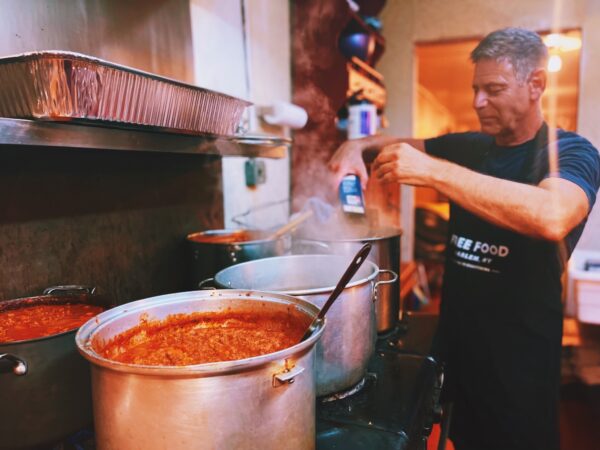 Years ago, while traveling in remote parts of India, I saw the monks there making intricate sand mandalas. They spend days methodically placing each grain of sand in its precise place, only to sweep it up when it’s completed. To me, preparing food is like that also.

A week spent preparing, gathering ingredients, testing recipes, and deciding on methods to cook the large quantities needed, as well as the many hours on the day of the meal to prepare food that will end up on a plate, be placed in front of a patron, and rapidly consumed.

I don’t know how the monks do it. After completing an intricate piece of art, I wouldn’t want to see it destroyed. But the impermanence of cooking doesn’t cross my mind, and in fact it excites and energizes me. Determining the perfect timing to layer ingredients for a sauce, take something out of the oven, and tasting, tasting, tasting every step of the way, the rapid pace, and the way everything is constantly changing, leaves little time to stop and admire what’s being created.

Today, I’m pacing on the sidewalk in front of the church where we prepare and serve the weekly meals. There is no cell signal in the basement where the kitchen is, so I come up to check my phone and see where the delayed meat order is. The ground turkey needs a lot of prep before being turned into meatballs. It’s like the star of the show is missing, and when it arrives will still need makeup and wardrobe. The meat finally arrives, over two hours late, and is rushed to the kitchen to be combined with the prepared ingredients for the BBQ Soul Food inspired meatballs.

The other day when asked, “What makes Free Food Harlem special?” One of the things I mentioned is the menu is chosen by the people who eat there. As a result, I’ve learned how to prepare collards, cornbread, yellow rice, and meatloaf, as well as today’s meal centered around tender, smokey meatballs baked in a spicy sweet sauce until it caramelizes around the edges.

I never know what will happen on Free Food meal days, who will show up to help cook and serve, what time the ingredients will arrive, which order may be delayed or missing an item. But I do know that whatever happens today, I will have a meal prepared and ready to serve at 5 p.m.

When the volunteers arrive, a mother and her grown daughter begin rolling meatballs. Their movements are effortless and familiar, like they have done this before hundreds of times, and I can tell they have prepared many meals together. Another new volunteer shows up, and I ask him to join the other meatballers. Without hesitation, he dons gloves and is wrist-deep in the seasoned ground turkey meat, rolling meatballs with the team. Later on that evening, when I offer him a meal, he reveals that he’s a vegan.

It’s 4:15 p.m., and time to stop and reset the kitchen for service. We’re still behind, but the meatball team has made enough for the first hour of service, and today’s volunteer potato masher is finishing up combining 100 pounds of Yukon gold potatoes with butter, sweet cream, salt, and pepper.

I am just completing the first two stock pots of collard leaves which have been washed, rolled, and chopped by two of our regulars. I layer the smoked turkey parts, herbs, vinegar, and honey into the pots, and just as I’m thinking about all the other things to do, Conrad arrives.

“Hey Conrad, have you made collards before?”

With his deep booming voice and even bigger smile he lets me know, “Yes, I have.”

At 5 p.m. the meal comes together. All the items are assembled for the first time on the first plate which is set in front of the first patron. It’s like the last grain of sand, the final puzzle piece is in its place. I stop cooking for a moment to look at this first plate, making sure the portion size and composition is right, then get back to cooking meatballs so that we have enough to make it till 7 p.m., when service concludes. I know that even before this meal is finished, our Free Food servers will be sitting with the patrons to determine next week’s menu, another mandala of sand to be crafted, then swept away.