Forty Days and Forty Nights in the Food Desert 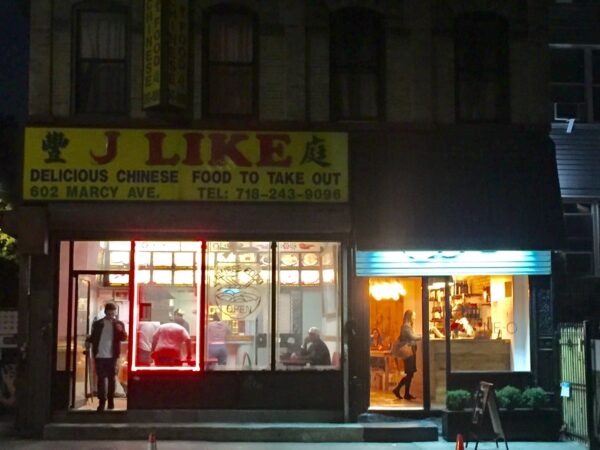 Marcy Ave. stop on the G train. Brooklyn, NY. Marcy Projects made famous by Jay Z. Ascend from the subway and take in the red brick of the abandoned industrial laundry facility, car fluid-stained pavement and yellowing, cracking sidewalks littered with cheap potato chip bags and spat out sunflower seed shells. “Kennedy Fried Chicken” — neon lights blazed 24/7 — yes Kennedy, the tri-state area’s Afghan immigrant-owned neighborhood version of KFC. Hit up the “U Like” NY Chinese restaurant (pictured above) for the classic four chicken wings and fries in stapled styrofoam trays, packed in generic plastic bags with the big smiley face on the side. Bags seen swinging in the hands of the neighborhood’s inhabitants making their way home for dinner.

“I just want a salad. Can a brother get a salad?” The closest thing to nature were those overly-salted sunflower seeds I’d seen planted in the infertile sidewalk. The closest thing to a grocery store was my choice of three bodegas: the one-stop shop for everything in the community — our grocery store, drug store, and social club all in one. The sun-faded products in the windows and resident bodega cats constantly standing guard. There were lots of things to choose from: Little Debbie, Bacon Egg Cheese on a roll, or a single cigarette for those who wanted. Multi-colored “drank” in the cooler. A colorful, sweet and salty array of unnatural options.

Then I spotted it. Lurking under the fluorescent light in the back cooler. There were the gigantic green peppers, tomatoes, and heads of iceberg lettuce, waxy, looking like artificial display food. This was my option. THIS was this neighborhood’s option long before I got here. My arrival to the neighborhood to be followed by boatloads of hipsters who would eventually bring the CSA and community gardens. Opening small organic markets that would take over the abandoned spaces left by those bodega owners who could no longer afford the rent as it increased.

As much as we complained about the gentrification, I had to admit where I was a gentrifier myself. And that with it came some healthy food options and access for those who could afford it. And something to move towards for those who couldn’t. They say once you know better, you do better. This was evidenced by the brother who yelled at me as I stood in line to tell me I got the wrong coconut water, as he handed me the certified organic one with a smile. So, now that the #5 General Tso combo has some competition, maybe the game will change. But addiction isn’t that easily broken, and there’s nothing like the temptation of a salty, greasy crunch.

—————————————————————————–
BlackBox is working in the Black community to bring healthy farm-to-table style meals to people, and connect with local organizations around working with the land and gardens, in cities and on farms, to restore our connection to nature while improving our health and awareness. If you have suggestions or feedback on organizations that support this goal, please email us at blackbox@unconditionalfreedom.org