Know Your Lifeboat: An Interview with Permaculturist Brock Dolman 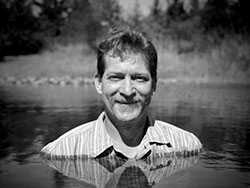 by Marita Prandoni, reprinted with permission

Brock Dolman is the Co-Founder of the influential Occidental Arts and Ecology School, The Water Institute, and has been integral in bringing permaculture and ecological restoration based principles into local, state, and national environmental policy. Brock attended the Land’s Soil and Water Summit in October 2021 and has been a key advisor in Unconditional Freedom’s Earth Program.

His Basins of Relations and other permaculture-related courses are designed for farmers, gardeners, land managers, landscapers, home or landowners, builders, educators, and activists who want to restore their surroundings and extend their unique ecosystem attributes. Brock also co-manages the Center’s biodiversity collection, orchards, and 70 acres of wilderness.

Living up to his specialized-generalist nature, and rekindling the dwindling art of the peripatetic natural historian, his experience ranges from the study of wildlife biology, native California botany and watershed ecology, to the practice of habitat restoration, education about regenerative human settlement design, ethno-ecology, and ecological literacy activism toward societal transformation.

Brock Dolman: Well, it’s not an Alaskan hairdo. My simple answer is that it’s a design methodology for regenerative human settlement patterns. Australians Bill Mollison and David Holmgren named the method when they introduced it in the 1970s, but much of what it talks about is on the cutting edge of 10,000-year-old ideas. As the word implies, it is a way of fostering the relationships in natural ecologies and of honoring the wisdom of cultures and people throughout time. Permaculture recognizes the foundation of history on which we stand with the modern issues we face.

EH: What are basins of relations?

BD: Most referential feedback happens on a watershed scale. Everybody on the planet lives in a watershed. Besides its poetic ring, the idea is one of a cradle, or a container as water flows overland, collecting into a river, and sometimes making its way to the ocean. Basins of Relations® are three-dimensional topographical territories created over time by geology, hydrology, fire, and uplifted and eroded land. They are about honoring and rekindling our relationship with all our relations on the planet. The most efficacious place for this is in the watershed. This is where we can have social, local, intentional community with other life forms and inanimate processes, like the fire cycle and the hydrological cycle. It’s not reductionist and it is not a NIMBY (Not In My Backyard) opportunity. For a community to have regenerative settlement patterns, we’d better figure out the water cycle, which is tied to the soil and air. The fire cycle is tied to the air cycle, which is responsible for vegetation, photosynthesis, smoke and nutrient processes like those involving phosphorus and nitrogen.

EH: I haven’t heard you use the word sustainability.

BD: If you asked a friend how her relationship with her husband was, and she told you it was sustainable, wouldn’t you get the sense that it wasn’t that great? When you unpack “sustainability,” you get a question about your ability to sustain the cycles of life. Watersheds should embody the geographic scale of applied sustainability, which must be regenerative because we desperately are in need of making up for lost time.

Watersheds offer an important scale for relationship and feedback. Is the water quality cleaner and quantity more abundant or not? If the river doesn’t reach the ocean or makes a dead zone at the mouth, we need to take pause and evaluate the cycle from ridgeline to river mouth. How are humans behaving there? What is their relationship to water, soil, nutrient cycle, and biodiversity? We need baseline criteria. Where are we starting, and what are we comparing our watershed to?

In the pre-contact Pacific Northwest, the salmon were so plentiful “you could walk on their backs.” What was the feedback mechanism that allowed them to flourish? If you choose indicators like the salmon, you identify keystone species. Certain critters, if you hold them up, help us track the health of a watershed from summit to sea. They reflect for us interspecies relationships.

In indigenous hydro-engineering systems like the acequias of northern New Mexico, Peru and Ecuador, or the chinampas of Mesoamerica, the whole is greater than the sum of its parciantes (water shareholders). It’s called a hydro-democracy or aqua-democracy—truly a commonwealth, when the ditch is flowing.

EH: Over history and around the world, going back millennia, many cultures have continued the erosion of soil, largely through livestock grazing. Can livestock have a restorative role in permaculture? 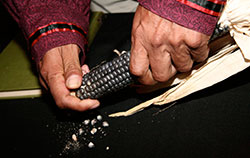 BD: History has good and bad examples. Part of being a good ecological designer is utilizing case studies that express behaviors that show cultural and ecological integrity over time versus witnessing the collapse of civilization from overuse or abuse of the natural resources a community depended on.

Agriculture includes forestry, livestock and cultivation of crops. The first cut on the land is cutting vegetation—converting trees and shrubs, grasses at the hand of people themselves. We may clear it to allow for settlements. Then we manipulate it for the extraction of resources, like wood, fodder or crops. Animals were domesticated and enslaved to be put to work by people. Just as a saw can be used to prune or to kill, cows can be used to stimulate regenerative growth of grasses or to denude the land. The responsibility comes back to the people manipulating the landscape. Don’t blame the cows.

We turned away from responsible agriculture when we committed to significant clear-cutting, allowing for the loss of topsoil, and by altering our waterways. The great deforestation has led to desertification. If we undermine resiliency within the larger scale trend, we begin to set up behaviors within the smaller scale trend that weaken resilience. We’ve compromised so many processes and flows in the tapestry of life that the warp and weft are now tattered and torn. We need a methodology to reweave this world.

EH: Most people living in cities don’t think about their watershed. The water flows from the tap.

BD: Watersheds can be as vast as the Mississippi basin, the third-largest in the world that drains 41% of the lower 48 U.S. states into the Gulf of Mexico, or they can functionally be as small as all the land in your neighborhood that flows from your yard, roof, driveway, and streets to the storm drain and into your local creek or lake. Watersheds underlie all human endeavors and form the foundation for all future aspirations and survival.

At any time, less than 1% of the world’s water is available as freshwater in lakes, rivers and accessible ground water for shared use by humans and other freshwater-dependent beings. The melting ice caps and glaciers are spilling into the saline oceans. As we drain wetlands and clear-cut forests, plow soils and pave over our watersheds, we further reduce freshwater supplies. OAEC’s practical and philosophical response is Conservation Hydrology®, which advocates that humans move from a dehydration model — pave it, pipe it, and pollute it — to a rehydration model — “slow it, spread it and sink it”®. Thankfully at a national level, as part of the Clean Water Act, stormwater management is increasingly based on waterspread restoration. Bio-swales and rainwater gardens serve to biologically filter storm water, enhancing its quality and allowing it to recharge aquifers while reducing flood flows.

EH: As a peripatetic natural historian, where have you roamed? What lessons have you brought home from other parts of the world?

BD: My dad is a retired Marine, so growing up, I traveled a lot in the U.S and Japan. As an adult I traveled in other countries — throughout Central America, the northern Andes, Brazil, Israel, Cyprus, and Turkey. The year 2009 was Darwin’s 200th birthday and as a member of the Junior Darwin Overachievers Society, I’m totally interested in tundra, rainforests, and a plethora of ecological diversity. What’s fun is going to places like the high, dry Tibetan plateau, where water systems are aligned with cultural religious integrity. By going to cultures that have a semblance of intactness, we can honor that and find wisdom in those traditions. Then we can incorporate those ideas back here in North America while tending the wild.

EH: How can we organize our own basins of relations?

BD: One task at hand is permeating the headwaters in our own heads and our imprint on our watersheds. We are perched on the tipping point of a “watershed moment.” Now is the time to bring our communities together to set in motion plans and processes that ensure our watersheds will remain healthy in perpetuity. Each process, like every watershed and its associated community, is unique. Often certain local, state and federal jurisdictions are ready to collaborate with communities. Get to know members on the regional water board, irrigation district, planning commission, board of supervisors, or city council. Know your state and federal legislators. Your home basin of relations is your lifeboat.