Seeing Through the Big Door 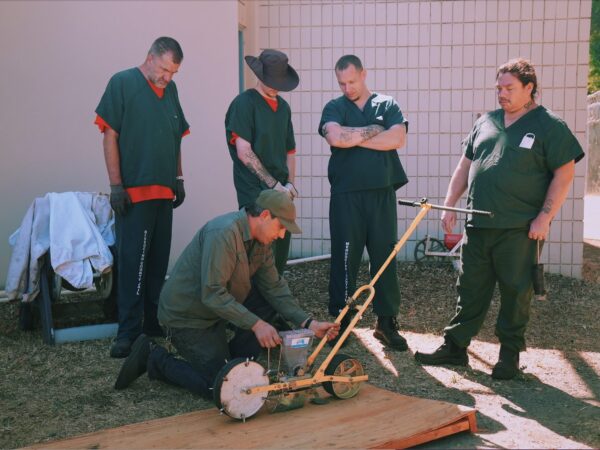 Joshua teaching Garden Crew how to use Jang seeder

Joshua Sternberg is the Botanical Sanctuary Garden Manager and Educator for the Unconditional Freedom Project at the Mendocino County Jail in Ukiah, California.

We walk through locked doors and gates over twenty times a day. Doors and gates open to the classroom, the breeze-way, the dorms, the kitchen, a body search station, the garden, and out to the big world. Keys are a crucial tool to this job. They live on the hip. Lose them and feel shame most certainly; lose the job maybe.

We open the door to the jail kitchen often to the scene of all-white-clad men bustling about preparing bread and soups and other staples of the jail diet. In here, a door opening is an event. The workers’ bosses — the three kitchen employees who go home every day — sometimes look up but usually don’t until you call their name over the clamor. They have as many variables moving through their minds as the three hundred plus meals that move through the different wings of the jail. The workers, who pack and pour, and stack and wheel the meals, always check out what could possibly be coming through that door.

On this day, coming through the door, it was the garden crew with hundreds of pounds of summer squash, close to as many pounds of cucumbers, a few buckets of basil, and some beets. The kitchen workers, like bees surrounding the queen, gathered around the bounty. Immediately, once the size of the harvest was acknowledged, fist bumps and “hell-yeah, that’s what I’m talking about,” and “good work fellas,” brought out shy smiles and proud chins on the faces of the garden crew. They talked about it every day till the next harvest.

One afternoon we walked through the classroom door. Two of the garden crew guys grabbed books of poetry from the shelves. They were giddy flipping through the large donated anthology. With a missing-tooth smile and eyes darting corner to corner one said, “Let’s read The Garden.” One section of the poem that stood out:

Your sacred Plants, if here below,
Only among the Plants will grow.
Society is all but rude,
To this delicious solitude.

The poem’s iambic tetrameter beat like a little drum and we all nodded as though an unexpected flavor had crossed our pallets. It hung in the air confusing and exotic with some kind of meaning driven by passion. A small ceremony occurred and suddenly poems had slipped into our shared world. The garden was now located somewhere inside. A door had opened to something unexpected.

Poems can seem like doors, at once both obscuring and revealing, assuring and confounding. We learn to observe in the garden, to look. Reading and listening to the poems required using a different group of muscles to tend to a different locale.

We learn with intention or not how to look and listen together. We watch and listen together in the garden daily. We pick up on confirmations of body language and reach into recently generated myths to find assurance and continuity.

“Watch out for the bubba hose,” we say while laughing and gathering a hose to water flats. We all chuckle when the boxer type squeaks at the sight of a lizard. We listen for the deer rustling in the fence line or the cart rolling meds down the breeze-way. We look for aphids on the kale or eggs in the brooder boxes. This is one of the great pleasures in the garden.

Ordained by our actions, poets and gardeners, we search daily for moments that reveal the sweetness not so readily spoken aloud here. Little by little we’re building a community around our experience. The freshness of a lemon cucumber or a crew member stepping up to explain something to the new guy adds to our shared commitment to be surprised by what we may find on any given day. The growing of a community might be difficult to notice, like a green tomato bulging beneath the vegetation. If we patiently observe and see through the razor wire, the twenty-foot fence, the green outfits, and the time left to serve, we can see a budding flower that someday might fruit.

While often things change in a carceral environment, they are rarely ever surprising. The garden or a poem is a realm of possible surprise. We may be in the same space but often a new vegetable is ripe or a plant shows a deficiency or sickness. When we walk outside, we are all sure change has happened, growth occurred. There is so much going on it can be dizzying to focus. We focus on keeping the garden clean so we can feel grounded. We get out of the midday heat to cool off and collect ourselves inside the classroom.

One afternoon to escape the heat it was suggested we write a garden poem. Most of the garden crew guys guffawed making that universal sound of pride that’s reminiscent of air released from a tire. After a bit of cajoling, one of them started letting lines fly like a freestyle. This buzzed the room and the others nodded in a quick conversion of willingness. A crew ready for adventure. Two of them read aloud their rhymes of garden thoughts, one in a children’s book style, sweet and simple, the other like a slam poet, aggressive and pulsing. The two remaining men refused to read their poems aloud.

“Nah… nah.” These two shy poets wanted their poems read in private behind the office door. They adamantly did not want them thrown away. A door slightly ajar with lamplight in the distance. These private poems were soft and troubled descriptions of garden beauty and sadness. In the poems there was tenderness in lines like “the garden is where I find peace,” and hope in “love begins here.”

One of our crew was being released. He was the gardener most captivated by insects and chickens. His appreciation for the beauty of butterfly wings was as loud and genuine as his appreciation for the mystique of the black widow. The least afraid of the large venomous spider, he would coax it out with a stick while the rest of us shivered under the sun. His confidence around the chickens was contagious and would draw others into the coop to hold the birds and feed them plums from the nearby wild plum shade tree. His joy and curiosity shined in the garden for two months but eventually his enthusiasm turned to fear. His fear was just as contagious as his wonder. He was the first of the garden crew to be released since we began. Usually joking and getting himself in the smallest of troubles (like checking out the females), he turned quiet and his eyes pointed down. He shared his concerns begrudgingly in the open. Scared, insecure, proud. We all wanted to help him once released but we knew we’d be in here and he out there with all the temptations, triggers, and intimidating features along the slope of re-entry.

There’s a door here that is the biggest. It begins to shut slowly as soon as the cuffs snap on and the patrol car is hurling towards intake. It slams shut when one realizes how much is gone. That whole world disappears and is replaced by a new infinitely smaller one. The door opens back up upon release and the big world comes rushing back.

We gathered around before his release. Our thoughts and prayers felt meager against the size of the troubled past and the enormity of the future challenges. Prayer is sometimes enough and sometimes practically nothing at all. He would be walking through a door that opened to the uncontained, big wild. Later that day, when talking about his chances, a colleague said she’s been to more funerals than graduations. Some doors get closed to move on.

Here is his poem:

So once again it’s happy
And living once more

A gardener is someone who cares about the living world, inside and out. There is insight to be found, both profound and practical when connecting the two. The poem can open a door to the garden inside. A garden opens a door to the natural world. We are custodians of trouble and beauty in both realms. Caring for micro-organisms, birds, reptiles, animals, fungi, plants, and each other is a way to reconcile feelings of alienation. Each garden is unique to the bone, to the gardener. A garden requires a gardener and vice-versa. What makes it thrive is care and observation. Figuring out why and how to care, help one to consider what it takes to get through the door, to see through it and glimpse something meaningful on the other side, to see the fruit beyond the thicket.

There is an indigenous idea of “seeing through.” It can be taken to mean observing with care and connection to something greater. It is often associated with seeing through this world to our ancestors or through the forest to other times past and future.

Seeing through is a difficult project these days, especially when incarcerated.  There’s a big door before the forest and it is dense with self-doubt, anger, criticism, injustice, temptation, and unfettered access to negativity, drugs, and poor decisions. It takes a lot to see through. It’s difficult to peer through the confusion and pain and see truths of the world that are not just in one’s head when one is surviving in a system.  The garden is a space of transformation where life dies and feeds new life. Something has to be given up for something to be gained.

It’s hard to tell what gets one through a door, through transformation. Life has to feel like it’s changing and you with it. Experience has shown that it requires first a willingness, then openness, and finally honesty to begin. These are foundational principles of a recovery program. It has been a life in recovery that led me to this work. I saw through what seemed impenetrable in abiding by these principles. I had to engage a curiosity that seemed to go against everything that I thought made me who I thought I was. I had to accept the responsibility of tending to my inner garden, so I could tend to others.

I am someone who considers himself to have gone through a transformation. To be clear, I am in recovery, not recovered. I have been incarcerated. I have had battles with alcohol and drugs. I am also a recovering poet and farmer! Many times, in my life, I thought I had a handle on my story and could see through my troubles, but there were doors that I was unwilling to look at or walk through. Most of my life I wasn’t ready for change.

Change is everywhere in the garden. It is not in the jail because it is a system. Systems run something through them. Jails are not designed, at the moment, as vectors for change. It is my hope and commitment to see through some of the challenges posed by the design of the jail system and its heavy doors. Together, we are the garden crew, and we walk through doors that open to harvest, recovery, nature, self-determination, community, and poetry. As custodians of trouble and beauty we walk outside, eyes and ears open to observations not just the same old space and story that quickly sends us back to that big door we cannot see through. The one that starts to close when the cuffs snap on and the squad car goes hurling towards intake.

Unconditional Freedom is not affiliated with any religious organization but welcomes peoples of all faiths and of none.