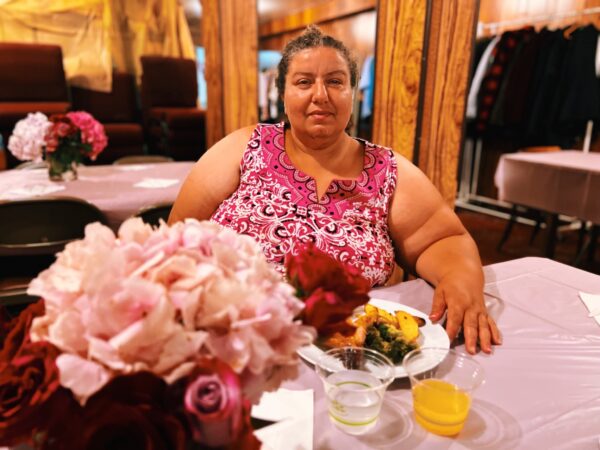 The first time I talked to Egypt she was walking in the door to the church. “Welcome,” I said, smiling at her.

“I’ll punch you in the face,” she said with a determined look. Those aren’t words I’m used to hearing coming from anyone, much less a woman about twice my size. The intensity of the words didn’t match the feeling in my body, but I moved out of the way nonetheless less and instinctually said “No, thank you.” She walked into the church and I wondered if that exchange had really just happened.

Now that I’ve gotten to know her better, I realize that is Egypt’s love language. I see her often on the street during the week between meals, and after she asks what we’ll be serving on Friday, she always yells “I never want to see you again!” Her form of love and connection.

Last week I sat at her table and asked how she was doing. At first she didn’t share much, I asked a few more questions and determined she wasn’t feeling talkative that day. I started to get up to leave but she asked me to stay, clearly enjoying the company. Capricia, sitting at the next table turned around to congratulate Egypt on one year in her apartment. They told me how they had known each other for years at the shelter, and finally had made it to a home, and here one year later, Egypt was still there. I got chills as she shared.

I asked Egypt what she thought of the food. This week was turkey meatloaf. She gave me a meh expression and said she didn’t really like American flavors. Egypt, as you may have surmised, was from the country of Egypt, hence her name. Capricia chimed in that Egypt was a great cook, that she knew all the best spices. I asked her what she liked to cook and she told me all about the middle eastern food she made, the herbs and sauces, how she floured and grilled fish, the flavors she enjoyed. We talked about Middle Eastern food and I shared how my family was from Israel and how much I loved the food from there. Egypt looked at me surprised when I said Israel and started speaking to me in Arabic. I responded in Hebrew. I tensed a little, wondering what her response would be, knowing our countries were technically at peace but that relations were still strained. The moment seemed to extend forever but then she smiled and we laughed together, connected through our heritage and food.

She said she’d cook me fish on the grill sometime. I told her I’d love that and suggested that she come cook with us at the church and we could make a middle eastern Free Food meal together. Anything she wanted. Her shy smile opened up and spread across her face. “Ok, maybe in a few weeks.” And then told me she never wanted to see me again.