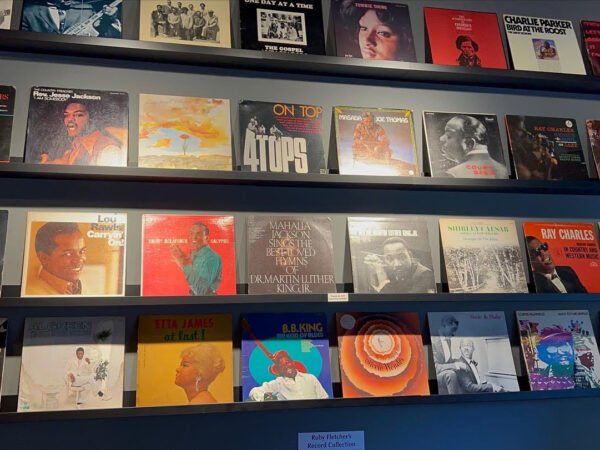 I recently visited the Ruby and Calvin Fletcher African American History Museum in Milford, Connecticut. My 97-year-old grandmother loves it. She loves taking anyone who visits her there. They’ve done a really nice job with the museum, which is in a historic New England house. At my age, 47, I’ve seen various versions of this collection, including reenactments and remnants of the forced journey of my ancestors from shore to shore. The horrors, the inhumanity, and the continued ill treatment of black folks through time, documented. The tour is usually capped by a showcase of the brilliance that came from these oppressive times through resilience and creativity.

Museum owner and descendant of the Fletchers, whom the museum is named after, Jeffery A. Fletcher, gave us a great tour that did just that. It took us deep into the pain and finished with the gifts that we brought to the world through the sounds of our musical genius. Many local Connecticut folks may never make it to D.C. to the National Museum of African American History and Culture, and it feels like this is a great opportunity to have a homegrown version of that experience.

There were all of the expected sections of the exhibit. One twist was where I’ve normally seen diagrams of slave ships packed like sardines, Fletcher showed a 3D version of what that would look like with a bunk-like space he created with mannequins and straw for bedding, a detail I had never considered. Another wall was lined with a map of the slave ship routes to the Americas, and it also highlighted the multiple ships that were overthrown and directed back to Africa by the African captives. I’d only known of the Amistad.

Eventually we got to the section with the segregation restroom signs. I first noticed there were Colored Men, White Men, and White Women’s bathroom signs, but no Colored Women’s sign. I didn’t know that black women often didn’t have access to bathrooms. I guess an old dog can still learn some things.

Next, I saw that Fletcher had a Starbucks sign hanging in the collection. This exhibit told his personal story of being denied access to a Starbucks bathroom. He filed a complaint and the exhibit included the response letter from Starbucks attempting to pay him $3,000 hush money to sign a Non-Disclosure Agreement. He said he didn’t take the money, because he was going to not only disclose it, but have “Starbucks in the African American history museum not for the good, but for the bad.”

I admired Mr. Fletcher’s unflinching energy in creating this museum and not basing his value on a comparison to the Smithsonian and what they have. His presence felt as big as the Smithsonian.

He stressed the importance of preserving this history, so that we don’t forget where we come from. Upon hearing that my mind felt conflicted by a swirl of other sayings: “If you don’t know your history, you’re bound to repeat it.” And then on the contrary… “You can’t move forward if you’re constantly looking backward.” Both could be true.

A couple things came up for me after the tour. First, who would benefit most from this museum and others like it? Then, in his Starbucks bathroom incident (and many others like it that happen to black folks, and probably others too), I ask myself, was it because he was black?

I’ve often assumed that in even the most minor cases, someone was a certain way with me because I am black. I’ve walked into places so many times expecting to not be welcomed and assumed every look or question that sounded slightly off was because I was black. But what if it was something else? What if they didn’t like men, tall people, or cops (in the case of Mr. Fletcher)?

When I’m sitting in first-class, maybe that person stares at me or asks me what I do because they literally want to know me. Maybe they’re flirting and are just awkward, and it’s not their judgment that I shouldn’t be there because I’m black. Maybe it’s the color of my hair, or lack of, or my style or something that actually has nothing to do with me. They may be just having a bad day. All things I’ve had to rewire my mind to consider after decades of assuming I’m being oppressed because I’m black. I’m not denying that it does happen, but I am trying on a different way of approaching the world that has me not getting stuck. I focus on the aspirations I have and contributions I will make when I show up.

Two nights later, a friend and I went to a nice restaurant down by the Pier in South Street Seaport, NYC. When we approached the hostess, she asked how she could help. This is one of the first triggers for me at a restaurant that has me think I’m being discriminated against. It may sound insane, but this is the play-by-play of my mind. “How can I help you? What kind of question is that? I’m arriving at your restaurant, how do you think you can help me?” Anyway. My friend answered her without the charge that I felt. Not sure if she is just more evolved than me or if she didn’t feel insulted by the question. My friend says, “We’d like to see a menu, please.” The lady points to the QR code for us to scan the online menu and lets us know that the restaurant has just actually reached capacity. Second trigger activate. “Yeahhhh” she says, “We actually just reached capacity and stopped seating people.”

What if they are blocking me because I’m black? Then what? Do I spend energy fighting to get into places that aren’t welcoming me? File complaints and protest to gain entry? Do I even want to be there in the first place? Is it some symbol that I’m equal or valued for me to be welcomed there? Do I need that? What if I take that energy and create my own space? Create the place I want to be or if nothing else, go where I’m welcomed?

Which brings me to this: feel how you want about Kanye, but when he started talking about Black Future Month, it really resonated with me. He wanted to create the space. We are doing and will do so much with the genius that’s coming through us specifically. How could we showcase that? How could we have a section in the museum for that? Carve out the space for it. What would it look like?