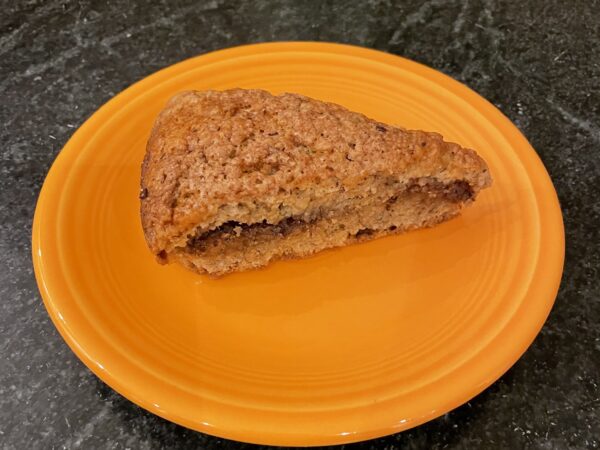 When I was in my late teens I began reading cookbooks like novels. It turns out I have something called synesthesia where a stimulus that comes in through one sense gets transferred to another sense. For me, it meant that when I read a recipe, I could smell it and taste it. If I were on a diet, I would read cookbooks because reading the recipe gave me almost as much satisfaction as eating the food, I didn’t need to eat it, I could just read about it.

My dear husband has a passion for scones as they remind him of England and the high teas he enjoyed in hotels when he would go on business trips to London. They would be elegantly presented on multi-tiered trays with a little pot of clotted cream and tea sandwiches cut in little triangles. Delicious scones with a tender crumb, but unfortunately, made with white flour and white sugar which are ingredients I rigorously try to avoid in my kitchen as Ramani is prediabetic and they trigger elevated blood sugar. But he would get misty eyed remembering those English scones so I kept reading and dreaming of a scone I could make for him that would produce the same reaction but would actually be good for him. My synesthesia helped because I could smell and taste what I was reading.

Years passed. I kept making scones with different ingredients but they never quite hit the mark. Then one day I was leafing through King Arthur’s Whole Grain Baking book looking for a scone that I could make for breakfast on his birthday, and I discovered something I had never seen before, a filled scone. In the center of the scone was a filling made of cinnamon, sugar, a tiny bit of flour, and butter to make a paste. They cleverly divided the scone batter in half and patted each half into a circle. They put one circle in the bottom of the baking pan, spread the filling on top and topped it with the other circle of dough — voilà, a filled scone.

I could taste it and feel the texture. I began dreaming. I could use sprouted spelt flour instead of the whole wheat called for in the recipe. That would give him more protein because the grain was sprouted.* I thought I could add cardamom instead of just cinnamon, to the filling and scone dough, which Ramani’s Indian heart would prefer. I could add toasted chopped pecans to the filling to give it more texture and overall I could use coconut palm sugar instead of cane sugar which would not spike his blood sugar level the way cane sugar does. Finally, I could use ghee instead of butter in the filling. These scones would not have the taste and texture of English scones, but they would be unique with that shot of sweet and spice in the center of the scone; I thought they would be fabulous.

And so it was, and so it is. He gives them a 10+ every time I make them for some special occasion. He is very proud of these scones and will always lend a helping hand in their creation.

This recipe was inspired by King Arthur Flour Whole Grain Baking.
Wherever possible, all ingredients are organic.

Preheat the oven to 375F. Grease a 9-inch round baking pan with ghee or line with parchment paper.

In a small bowl add the sugar, cardamom, cinnamon, and all-purpose flour and pecans. Add the ghee and rub into the dry ingredients until you have a spreadable paste. Set aside.

In a small bowl, whisk together the egg, half and half, and vanilla.

If you used the food processor, now dump the dough into a large bowl. Gradually add the liquid to the flour, and stir it with a fork until the dough just holds together. The dough will be sticky.

Turn the dough out onto a floured work surface and cut it in half. Knead each half gently and pat into two 9-inch circles. Place one of the circles into the prepared pan. Spread the filling on top, then place the second circle on top, pressing down lightly to remove any air pockets.

With a bench knife cut the dough into twelve wedges. The easiest way to do this is to cut it first into quarters, then cut each quarter into three making a total of twelve scones.

Brush the tops of the scones with milk and then sprinkle with cinnamon sugar.

Bake the scones for 40 minutes until golden brown and firm to the touch in the center. Remove from the oven and let cool on a wire rack for 10 minutes. Run a dull knife around the outside edge of the pan. Place a plate on top and flip the scones over. Remove the cake pan and put a plate in its place. Flip the scones back so now they are right-side up.

*If a grain is sprouted, it avoids a problem associated with baking with whole grain. Untreated whole grains contain phytic acid, an organic acid in which phosphorus is bound in the outer bran layer of the grain. If the phytic acid is left untreated it will combine with the minerals such as calcium, magnesium, copper, iron, and zinc in the intestinal tract and prevent their absorption, so you won’t get the benefit of these wonderful minerals. For more information on this process, read Sally Fallon’s Nourishing Traditions, page 452.