Art as Therapy: Releasing Complex Thought and Emotions into an Abstract Visual Image Painting: “The Revelation” 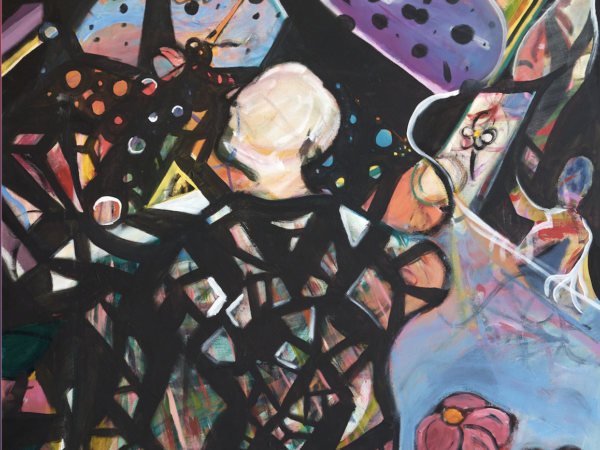 An English teacher and translator living in Brazil, João’s paintings express a real felt moment and invite the viewer to explore each piece for meaning and coherence, which the artist believes to be an activity central to life.

“Unload whatever you carry around in your heart, in your mind, in your soul, in your psyche. Don’t judge it, let it out and expect to surprise yourself with what you create. Give yourself to the process, inspiration, and promise. Let the poignancy of what you carry guide you in your expression and process, rather than letting your mind guide you. Let the mind follow. Put your intuition in first place. That, for me, is what creating, in any form, is all about: the experience of letting your intuition guide you, letting your imagination swell to states of grandeur, being a genius, monk, child of God or shaman for a moment, and feeling that there can be no failure because the act of creating, itself, is to access your highest self and thus represents an internal triumph over the self, over the world as you perceive it, over doubts and demons.”

In this painting we see the profile of a large face, looking to the right — the neck, chin, lips, and nose. Where the eye would be, is what appears to be a spaceship. If we can see that, then we can see what was intended to be the Pachamama, an Incan “Earth Mother” goddess.

I had been living in Brazil for about nine years when I painted this. The “Earth Mother” concept came because of my surroundings: blue skies over green mountains patched with coffee and banana plantations, eucalyptus forests everywhere. I had not had so much contact with nature prior to my time in Brazil, as I am originally from Connecticut and have spent most of my life in the suburbs or metropolises like New York and Los Angeles.

Inside the face of Pachamama, we see a white circle which is the back of a man’s head with his arms stretched out. This man disintegrates into colorful pieces: the angular pieces fall and the circular ones rise like bubbles.

This figure represents the Priest, and depicts the manner in which he gives himself in order to know higher powers. Though he is within Pachamama, in the sky flies a spacecraft, which contrasts with the priest’s transcendental moment.

Perhaps the priest is being “beamed up” to the spacecraft, like in the movies. Whatever our convictions, we can never really know. We should be happy we have any conviction; be open to the unexpected.

Outside of Pachamama’s face, at the nose, we see a man holding a painting of a flower. He presents this to Pachamama to see if the painting holds any essence of the real flowers below, which represents the gesture of creation in which we attempt to fashion something according to higher principles or some type of metaphysics which imbues our creation with the spark, or essence, of life.

So, in this “portrait of thoughts,” the actions of the Priest and the Artist are depicted as the same from a metaphysical standpoint. They are experiencing “revelation” insofar as they are experiencing communication with a higher power, in this case, the Earth goddess, Pachamama.

When we seek to align ourselves with a higher power, the self disintegrates to become part of the whole, like the Priest. We feel ourselves becoming both one with everything and nothing at once. Some doctors call this mania, drug addicts call it a high, meditators call it a state of mind, and scientists call it frequencies of the brain. Nonetheless, the experience is unique to the subject and much richer than any nomenclature a specialist would give it.

This painting and its themes were influenced by the thoughts and experiences I was having at the time. I had just started painting. I had been reading the Bible, trying to understand Jesus better. I had just started to study Chi Gong and was traveling every weekend as I performed live shows in a psychedelic rock band. This all amounted to a collage of inspiration and information, which I almost obsessively contemplated. Instead of writing a book, I decided to embed all of the existential ideas I was having into an image. This painting took me about two months to complete. I nearly burned it at one point.
Art is a great way to unleash, unload, and articulate ideas that maybe wouldn’t make for ideal conversation (being that these are heavy ideas) or would not have a readership if we were to write them down.

The visual image allows one to enjoy complex concepts wrapped into symbols, figures, color schemes, etc. in a manner that is silent. There are no words, no sounds, no obligations on the part of the audience to listen, or in this case, look and analyze, for any particular length of time. The viewer can look and see what he sees. He can linger on a painting and try to read into everything, or he can appreciate a painting on more superficial levels; that is to say, strictly aesthetic levels.
Art is therapeutic in this way: it distills an otherwise overwhelming amount of information into a single and simple representation.
My personal experience of freedom rests in the challenge of organizing seemingly disparate elements in ways that can be deduced back to logical and coherent narratives or insights. This journey is my ego unleashed, spirit unbridled, mind uncontained. The realization of self, however ephemeral it may be, is a version of freedom that everyone pursues, directly or indirectly, consciously or subconsciously. Not symbolic freedoms like money, or even time, but existential, experiential freedoms of being whatever we imagine ourselves to be, seeing the world without justifications, without our need to defend arguments or opinions.
In the silent act of painting, our language expresses itself and speaks more to the trained than the untrained eye, more to those who approach art as what it both is and can be. This act of creation can be beautiful and thoughtful, but it also can be a window into a mind, soul, psyche, master, and collective pool of consciousness where we recognize ourselves. Painting invites us into temples grander than the rooms and offices of everyday life.