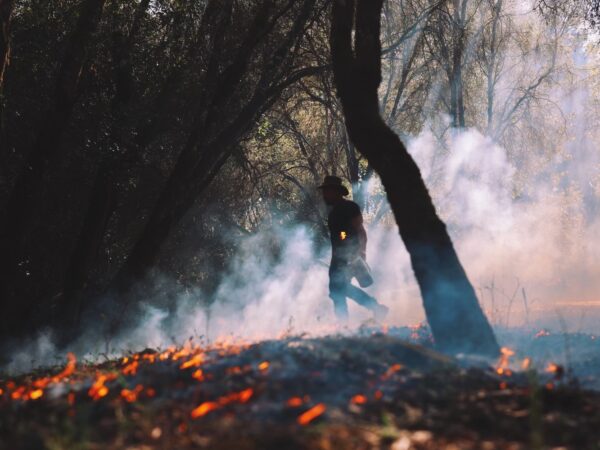 I used to have these dreams, and they all involved tidal waves or tsunamis. I would sit there at the edge of a beach with a bunch of friends and all of a sudden, a huge wave would start coming. I could see it out in the distance, but I had nowhere to go, and there was nothing I could do. I’d wake up in a cold sweat. A friend told me that my only job was to stay relaxed and loving in these moments, to remember that I was a part of this web of life, and he was right — when I did that, the fear receded just like the water’s surge.

Fire is the same way. We watch in terror as the megafires play out on the nightly news, uprooting every man, woman, child, and animal in their path. We see devastation, great forests reduced to ash, and it scares us. It makes us wonder when the devastation is going to happen to us.

We had a house fire during our first year on the Land, in 2017. I was right next door when my friend alerted me to the flames. I panicked and rushed to the fire hydrant. I couldn’t get the cap off and fumbled around with it before I finally got the hose attached, turned it on, and then the fire hose quickly filled and tangled tight. I couldn’t breathe because my heart was beating a million miles a second. My friends and I ended up saving the house and preventing the fire from spreading, but we were terrified by the experience.

A couple of days later, the first wave of mega fires hit Sonoma and then Mendocino Counties, and the waves of conflagration haven’t stopped since. Every year, literally every year, the fires get bigger, more devastating. Our eyes glued to our Cal Fire app, we watch how close the fires reach. If the fires are 100 miles away, they might as well be just a mile away. This is a real, perceived threat.

A friend and I were on a drive and he started sharing that the Indigenous Americans, the Pomo tribe in our region, used fire to manage the health of the forest, to initiate acorn harvests, and many other interesting practices revolving around soil fertility and cultivation. The Pomo and other Indigenous tribes deliberately set fire to their land. This intentional burning blew my mind but instantly cracked it open with a new way of thinking and new roads to travel.

A year later, March 2021, we found ourselves at a neighboring property lighting the ground around a large stand of Douglas Fir trees. This idea that we could start a fire to make ourselves safer was so foreign but made perfect sense.

As the flames grew, my hands wrapped around the drip torch’s steel handle, and I put more fire on the ground. In the thick layer of pine needles crackling on the ground, something steadied in me. Fear gave way to confidence. I became comfortable around fire, until the fire got up into the trees. Then I reached for water bags — super soakers for grown-ups — and shot water twenty feet up to put the fire out.

Now, even this former fear is gone. We have begun to purposely set fire to trees to build their resilience to fire, a practice called controlled burning.

My panic of burning left; the trembling fear dissipated.

We’re fortunate here on the Land to be part of a community rooted in these kinds of practices. We don’t just practice prescribed burning or ecological restoration, but we believe and practice cultivating and tending to the human being’s ecology. We have thoughts, fears, emotions, dreams. We live inside bodies that need care. We have the Art of Soulmaking to help us navigate our inner world, yoga, meditation, and OM to help us get in touch with our bodies, and soil to help nourish and connect us to our Earth. Each of us practice becoming intimate with our own human ecology.

We learn to move towards our fear with respect for its impact, gain the knowledge and experience necessary to understand how it works, and then integrate the skills needed to work with it, instead of running away.

Fire is like life; there’s math in flames. Ignition’s behavior is based on the fuel-load, wind speed and direction, and geography. Sometimes predictable, the blaze can run out of control in a moment. If we learn to stay with the heat’s intensity, keep our minds steady, we can make good decisions. Sometimes the flames are big and scary enough to force us to run. Just like nature, fire has its own laws, and we’re wise to heed caution and good judgment when working with it.

We can alert ourselves to lessons in smoke, ash, flame, how what might seem to destroy and annihilate us can teach us a path of resiliency and sustenance.