A Window into the Jail Monastery 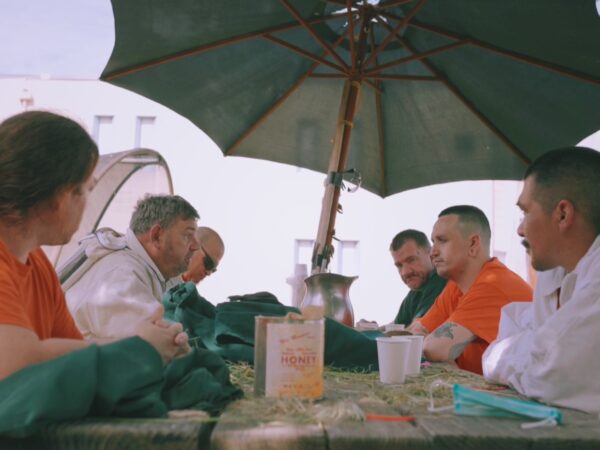 Ten men quietly sit around a room in the Mendocino County Jail (MCJ), some on the carpeted floor and some on classroom chairs. Their eyes close as they listen to renowned Zen Buddhist teacher Joan Halifax instruct them on how to follow their breaths, her voice so magnetizing that it almost feels like she is in the room with them. She guides them through the Lion’s Roar Meditation, a meditation that encourages us to befriend our pain and the emotions that come with it like anger, sadness, and grief. All the earlier discussions about stressful court dates and heartbreak from the men missing their families melt into a rich warmth. People talk right outside the classroom window, but we barely notice the murmur because the room is absorbed in stillness.

Five women stand on their yoga mats in tree pose, with one older woman doing a modified version from her chair. Some stand perfectly straight and still, while others tip over slightly, but everyone works at their own edge. There’s no competition, just intense focus with moments of admiration and encouragement for one another. They share how they’re doing throughout the class.

One of the women who had never practiced yoga before says, “This is hard work, but I’m happy I’m trying it.” Another woman who grew up doing yoga but hadn’t done it for years says her body really needs this practice. We can hear the exhales and sighs as their bodies stretch and lengthen and strengthen through the rhythm of various poses that make up the class. Another Monastic Library video is put to good use as the incarcerated residents of MCJ dive into their practices.

After picking up the garden crew from their housing unit, I remind them that Sheriff Kendall begins his beekeeping class for them today. They are energized by this sense of purpose, learning a new skill and bonding as a team in the care of these bees. The Sheriff has a whole set up: a lesson plan about the life cycle of bees, wood, and tools so they can start building the hives afterwards. The men work with their hands in a new way and are happy to do something besides heavy weeding to prepare our spring garden beds.

The Sheriff laughs and jokes with them as he demonstrates how to construct hives and creates an atmosphere of teacher/student rather than Sheriff/inmate. He knows one of the guys on our crew well, an Indigenous American from Covello. The Sheriff grew up with his dad and knows the whole family. We can feel the genuine care he has for him, asking how his elders are doing and what he’s looking forward to when he gets out. Sheriff Kendall invests that same level of interest with all of the men and wants to know more about their worlds in between the loud punches of a nail gun. There’s a collective feeling of enjoyment and learning; all parties enlivened in their joint task. This is the first of many classes with the Sheriff. Every Thursday he does a workshop to teach about bees, and soon, chickens too.

Our Prison Monastery feels strong and ever-expanding. Residents and staff alike prioritize nourishment for the soul through practice, ecological restoration, and education, and the effects are noticeable. The culture is slowly starting to shift from one of punishment to one of learning and evolving.