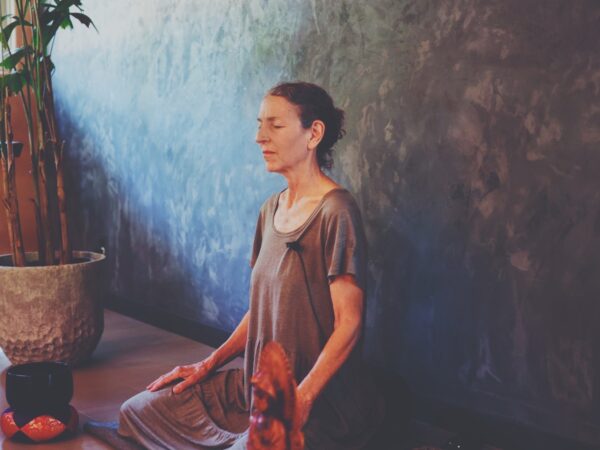 He may be at home in the kitchen, but famed Zen chef Edward Espe Brown can’t handle the mall, and don’t even mention computers.

Forty years later, I still find this teaching reassuring. Yep, I say, that’s the universe I live in. Faced with my own incompetence and the critical judgment of others when assessing my performance, I take refuge in understanding there are limits to the power of meditation to fix all of life’s ills. Perhaps meditation does solve all of our problems, dissolves all our challenges, but I’m not there yet. What a relief it is to recognize the basic impossibility, and stop being so hard on myself.

A while back I began having problems with my IBM ThinkPad, as in it did not start when I turned it on.

Calvin, my computer guru (God isn’t dead, he’s a computer wizard) suggested I get a Mac.

“Oh, really? And what kind of person is that? The kind who doesn’t like computers and all the problems they have doing what one expects them to do?”

“No, Edward, you’re intuitive and creative. Why don’t you stop by the Mac store in Corte Madera and see what you think?”

“Right, Calvin, and when was the last time I was at the mall? It’s been years.”

“Okay, but if you have a chance, check it out.” With that, Calvin said a blessing — and my ThinkPad started thinking again.

Not really making plans to stop by the mall, lo and behold, a few days later I’m driving on the freeway northward from San Francisco, and decide I have time to make this excursion. I take the Corte Madera exit and head into the mall, having no idea where to find the Mac store.

I come to a kiosk with a map of the mall and an arrow that proclaims: “You are here.” As a Zen student I thought I already knew this: “Wherever you go, there you are.” Of course, I’m here, where else would I be? Then I start thinking about the Tibetan master Urgyen Tulku, who said the secret teaching is: “You are you. You are here.”

I’m paraphrasing, but this is the gist of what he said. “You Americans like getting somewhere, you want to improve, and you want to have something to show for your efforts, but you don’t know where you are. ‘You are here.’ This is key. When you know where you are, then you will know where to go from there.” I study the map: straight ahead, turn right, and first store on the right. Okay, here goes.

The inner passageway has trees, flowers, and how nice, a bench outside the Mac store, where I pause for a bit, confused about what I’m doing here. The shoppers are dressed casual smart, they know who they are — shoppers — and what they are doing here — shopping. They walk with an easy confident grace, knowing they can make lofty assessments about what to buy — the world is theirs for the shopping. But what about me? Do I have enough money to spend? Am I a good American shopper, doing my part to keep the economy going? Do my clothes give me away? I feel like one of them is going to confront me: “Excuse me, Mr. Brown, but you obviously get your clothes from Ross, Dress For Less. What are you doing here in our mall? We’re not sure you really belong here.”

The Mac store beckons with a window display full of pink fluff that reminds me of cotton candy — “iPod Nanos now come in hot pink! Get yours today!” When I approach the window I can spot them amid the fluff, the size of credit cards: emerald green, metallic sky blue, purple-pink, candy-apple red… “Whatever for?” I ask myself, and step into the store.

On the left are computers on a counter — stand here and try them! I go right ahead. The computers are white plastic, iMacs, I guess. What should I be trying to do? I’m not going to be able to get my email. See how the keys feel? They click a bit. I notice there’s a lot of energy in here. On the wall behind me is a giant flat-screen TV with a flurry of fireballs of explosive noises. Signs to let you know that you can now download your movies through your Apple computer. That’s nice, I muse, for people who watch movies.

I wander toward the back of the store. It’s crowded with people, largely under thirty, and the energy is buzzing. At the far back I can see the Apple “Genius Bar,” which I’ve heard about from my young friend Eli, who works as an Apple Genius in the East Bay. You tell the genius your problem and have them solve it.

A number of people are at the Bar, drinking in the intoxicating computer savoir faire. On my left is a sales counter. Everyone seems to know who they are and what they want — purposeful, savvy, competent, hip — and isn’t it exciting? Perhaps they’re as clueless as me, but I’m starting to feel very small and out of place. I turn away from the counter toward the middle of the store where there are free standing product display cases. I can’t tell what any of the products are, and having long forgotten what I’m doing here, I’m feeling bereft and out of place.

A woman with a name badge approaches me. With an easy, reassuring smile, she asks if she can help. “I don’t know,” I confess, “I’ve gotten overwhelmed with all the energy in the store, and I’m feeling small and scared.”

Cheerfully she inquires, “Have you tried meditation?”

I may be overwhelmed, but I’m not about to admit that I’ve been meditating for nearly forty-five years, apparently to no avail, or this just wouldn’t be happening to me! Clearly, I’m a failure at meditation, because by now, by golly, I ought to be Master of the Universe! And if not the whole wide universe, at least master of my own objectionable feelings: Edward, are you still getting overwhelmed? You might want to admit what a failure you are and try harder in the future. Meditate more, and life will not be so impossible.

“Yes,” she says with a rush of confidence. “I’ve been meditating for almost three years.”

“Oh, I just love it,” she beams. “It’s made all the difference, and I have such a wonderful teacher.”

After hearing about her wonderful teacher and choking down her encouragement to do more meditation, I excuse myself, saying, “Thank you for telling me about your meditation practice. I think I need to go home and think more carefully about what I want.”

Calvin laughs when I tell him about my Apple experience. “Ed, you’re a meditation teacher, not a techie. Let me help you get what you need.”

Shortly after this, Calvin’s blessing on my ThinkPad apparently expires and I really do need a new computer, so he arranges to meet me outside the Mac store.

“Now Ed,” he says, “Before we go in, let’s sit down on the bench and think carefully about what you want so we can focus on that and get in and get out.”

Beautiful women are strolling by, so while we’re talking, my eyes wander from time to time, following the attractively dressed bodies: tight jeans, low-slung belts, flash-of-color scarves. Then I start reflecting that the women are not themselves beautiful — they just walk around looking beautiful: “You do like my look, don’t you? It’s a good one, isn’t it?” Beyond their look, I wonder who’s there? Not much in the way of clues. What’s clear, though, and they don’t need to say it, is that “it’s not for you, old man.” Life is basically impossible. You do it every day.

Calvin’s getting our list together: computer, modem for my dial-up.

“Do you want a service policy? Probably not. How about an iPod — you could use it in your car, and I’ll help you get it set up.”

“Sure,” I say, “as long as I’m getting an Apple computer, I’ll get an iPod. I want one in that hot purple-pink.”

Calm as can be, somewhat deadpan, Calvin says, “Wow, you’re really getting into this shopping stuff, aren’t you Ed?”

I’m tempted to tell Calvin my meditation must be going better, but I shrug. Feeling confident with him by my side, I head into the store.