Restoration: Young Men and Their Plot of Land 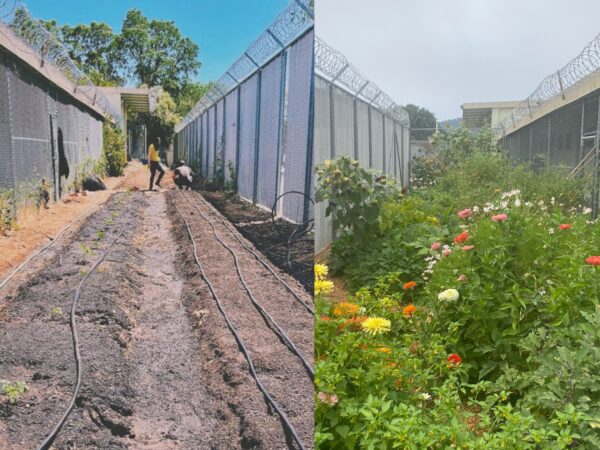 Like for any garden startup, we were concerned the land at the juvenile detention center would be barren. The very first order of business was to rent a rototiller to break up the soil. A huge mound of compost was also donated to the program by Cold Creek Compost in Ukiah. The boys really enjoyed using the rototiller and moving compost around. We got their input on what vegetables and flowers to grow before we purchased seeds. We were happy to see that the space had fig, plum, apple, walnut, and olive trees.

The center’s yard has now become the boys’ space, with a thriving garden and orchard. Witnessing the youth’s relationship with what they grow and care for has been fascinating. The range of knowledge these boys already had on gardening was phenomenal. They have taught me so much — I grew up in New York City and have very little experience in gardening, and they have quite a bit of knowledge about tending to the soil. I was happy for them having been raised with this kind of exposure and connection to the earth. It was beautiful to watch the ownership, mastery, and sense of nurturing these young men had for their facility’s new garden/orchard once we developed it.

One of the boys asked us to buy lavender plants to grow. He told us his mom loved lavender and when he interacts with it, he thinks of her. His mother had been in jail most of his life, and he grew up primarily with his grandmother. The young man chose the location to plant the lavender and decided what spacing he wanted in between them. He is very protective around those plants. When he sees them wilting, he gets upset and ensures they get watered properly. He likes to pick the lavender sprigs from time to time and smell them while he works in the garden.

We had the youth weed around the trees so that afterwards we could lay compost around them. They were taught to water the ground around the trees’ roots and not the trunks to prevent rotting. The plum and fig trees bore delicious fruit. Watching the boys harvest the fruits and enjoy eating them filled us with joy. Compared to the food the boys are fed in the detention hall, anything eaten from the garden is a true delight for them.

The apple trees have yet to bear fruit. In the garden, there are just two small apple trees. When we first arrived, the delicate trees were both inside of wooden barrels and needed to be transplanted into the ground. Their roots no longer had room to grow and spread. So far, we’ve transplanted one of the trees. One of the older boys, who’s had some experience with this activity before, was adamant about having the location approved by him and also being the one to lead the charge on their planting. When we got it done, I told him this is how he would be remembered here as he would be getting out soon. I hope he still looks back and remembers the tree.

The garden program at Mendocino County Juvenile Hall has produced countless stories and experiences just like these, so much so that it would take a book to write about them. The connection between the boys, the earth, and their inner change has been heartwarming to witness. While it might take some time to flourish and bear fruit, a seed of love has been planted into their souls.