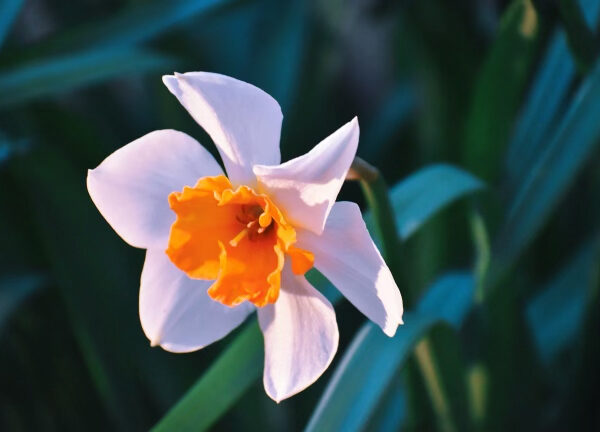 My friend Sharon told me a story about a friend of hers who had been a nurse for the homeless in Boston and then retired and moved up to Maine. After not working for a couple of years, she got a job distributing medications at a maximum-security prison. In the spring, when it was daffodil season, she decided to take a daffodil with her to the prison. She put it on her med cart but was worried about this because prisons are pretty uptight places. She was worried about what the prison officers would think, what they would say to her. What could happen? Well, they could fire me, she thought.

She passed him the daffodil, and he smelled it. After a bit, he handed it back to her.

Soon each prisoner down the row wanted to hold and smell the daffodil.

One prisoner said, “That smells so good. I’ve heard that lilacs smell good too. I’ve never smelled one. I hope I can smell lilacs someday.”

She went down to the end of the row where a prison officer was standing. He said to her, “I had no idea these men were so sensitive and caring. I had no idea.”

What reality are you living in?

What reality were the guards living in?

Many people, perhaps most, think prisoners are insensitive, uncaring creatures who simply need to be punished.

How are we going to treat each other?

How do we talk to each other?

We are all humans who want to smell daffodils.

Sometimes we forget that we are all sensuous beings, and we get caught up in our mind’s reality. Those in prison may have thought (mistakenly) that it would be helpful to be violent to someone. I too have gotten caught up in that reality.

Whoever we are, we believe our version of reality.

What do we do with such a vision of reality?

How will we learn to live with ourselves and with one another?

This is difficult to talk about with anyone who is caught up in their own vision of reality. We pray that each of us can observe our awareness closely enough that we can relax a bit around our version of reality and start to notice how sensitive or caring the misbehaving person can be — a frightened, scared person, who may love to smell flowers. We don’t have to fix this person or beat them into submission. Then we can start to have a sense of peace and harmony. We can even have an experience of well-being and happiness with one another and with ourselves.