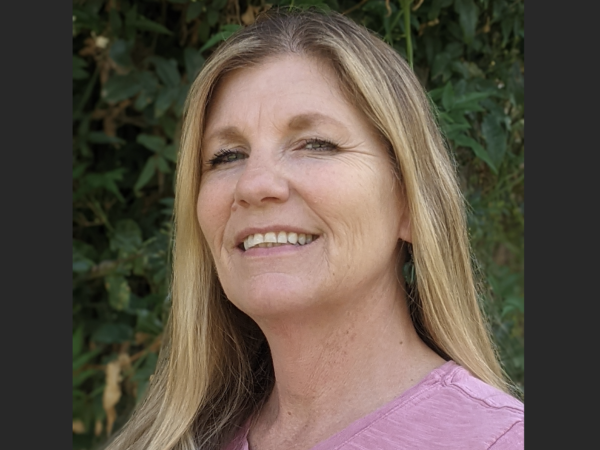 Bio
Lynn Slay has worked in the corrections field for 22 years. She spent 20 of those years working in a juvenile detention facility where she started several successful programs, including the garden/orchard program. Throughout her career, she has experienced heartbreak and tragedy, but she is confident she has achieved her mission to positively impact the lives of others. Her passion to make a difference continues in her current position with the Sheriff's Dept in California. where she supervises inmates working in the kitchen.

“There was a moment where my husband said, “This just isn't working. You're just not here. You're not present, not happy.” It was an eye-opener for me”, so that’s when I tried some different things.”

I got into corrections because I grew up in foster homes and I lived with one foster family that really helped change me. Working Juvenile Hall was my way of repaying them, by going to work with high-risk youth. That was my dream. When I started going to college to get my degree, I realized that it was something that I was passionate about and felt I was good at. I eventually spent the next 20 years working at a Juvenile Hall in Northern California. Recently, I got transferred to the Sheriff’s department in the jail supervising inmates in the kitchen.

My first day on the job was scary right off the bat. They tell you not to turn your back on the inmates and stuff like that. When you first start, you know you’re going to be working with kids, even though the training was more geared towards adults. So, when I started working with kids, that first day was pretty intimidating. I was told to come in hard because it is easier to back off on your personality or your persona than it is to ramp it up. I came in with a really hard shell, zero gray area, right by the book because that’s what they told me. This was back in the 1990s, and it was a different philosophy then. We had a really tough group of kids at that time. As the years went by, I was promoted to a supervisor and I got to see things from a different angle, and those things that were such a big deal when I was new weren’t such a big deal anymore. I started softening up as years went on.

My career was my whole life even outside of work. In training they suggest that we do things to relieve stress, so I started doing hiking, camping, and outdoor activities that really helped me. That was helpful because it just started to feel like I could never get my mind off work or get away from it. You bring it home and, especially when you have young kids, you don’t want to put that stuff in their head. I remember one of my supervisors telling me that only people that work in that field can understand and sympathize with you, that other people are not going to get what you’re talking about. That’s probably why I hung out with coworkers a lot. Eventually, I stopped hanging out with them because it was making it worse. With my fellow COs, there was a lot of alcoholism and a high divorce rate. Now I’m seeing them with all kinds of different addictions and people lose their jobs over that kind of stuff. I’ve seen it be a hardship on a lot of people that I worked with. I think it’s the inability to leave work at work and not take it home or take it personally.

The job weighs on you and it begins to change you. I remember a period in my career when things were really tough. It was probably a three-year period where things were incredibly difficult, and I took a lot of things personally. I was literally sick all the time. I would vomit before I went to work. It was hard on me mentally, emotionally, and physically. I definitely took my job home with me.

During that time, sadly to say, I had suicidal thoughts, especially one time when I really thought about going through with it. I don’t know if it was specifically with my job or just my life or my past experiences, but I definitely think my career aided in those thoughts. It was during a time that was so overwhelming and relentless. Every day you’ve got to go in and be hypervigilant of what’s going to happen that day.

I was working graveyard shifts, so that didn’t help my relationship with my family. My mind was always on work stuff. It was a combination of stress and lack of sleep because we were working over-time. I wasn’t present mentally at home and I wasn’t sleeping well. I was so over-protective with my kids, grilling them on where they were going and what they were doing all the time. I live in a small town and I see these inmates, these youths, in a grocery store. I knew what they could be like.

When I was not at work, I had to sit with my back to the wall when I went places, and often felt like somebody was trying to manipulate me or take advantage of me. You tend to treat other people outside of work like inmates. You don’t realize you are doing it but, looking back, I can see how my untrusting nature made it hard, especially on my family because they felt like I never trusted them.

There was a moment where my husband said, “This just isn’t working. You’re just not here. You’re not present, not happy.” It was an eye-opener for me, so that’s when I tried some different things. I went to therapy. I went to counseling, because being able to talk about it really helped. I incorporated exercise, meditation, and hanging out with different people.

As the years went on, things evolved and it became more rewarding, such as when you had a kid come back and thank you or call you and thank you. For me, that’s what the job is all about. I’ve always had this unique ability to see the good in people and have a lot of hope for people, particularly these high-risk youth. I think those are the little nuggets, the little rewards that keep me going. I felt like I was really good at it, so I have had a very rewarding career. I still hear that every day about inmates talking about how they’re treated. They would say, “Thank you for respecting me and treating me like a human being.” And that’s what I try to do. I try to treat them like human beings. It is a thankless job without a doubt, so you have to find what keeps you going.

In a small town, I sometimes run into kids from the jail and it’s always funny because they’ll say,” Where do I know you from?” They’ll be with their mom or their grandma and you wonder if they really want you to remind them, but it’s usually always positive. If it’s not, they’ll just turn and walk away.

I was fortunate when I worked at Juvenile Hall that I could secure a grant. We used it to build a garden of raised beds. We solicited some of the local businesses and they donated money. We built a huge orchard. We had 13 fruit trees and I would go out with the kids, picking weeds or picking vegetables. That was really rewarding. We were able to incorporate those fruits and vegetables into our daily menu, which was so much better than the prison food available.

The kids would pick some of the fruits and vegetables and take them to the Fair, along with baked goods they made. The kids really loved it and it was so rewarding for me to see them reap what they sowed. Planting and watering their plants, picking them, and eating them in meals. They always looked forward to going out in the garden. It was such a different atmosphere being around plants and they looked forward to it. They worked hard and did a great job. It’s something I’m trying to do at the jail I am at now. We have a garden area and I’m trying to get that up and running again.

Towards the end of working at Juvenile Hall, I was assaulted and I blew my knee out. I had to have knee surgery and it ultimately led to having to leave that job because I had a permanent injury and a doctor wouldn’t release me back. That was devastating. Then I started working as a cook at the place I am at now so I could stay with the county. I had wanted to go back to the supervisor position, because I liked aspects of the job, the fast pace, the adrenaline, but I am glad I didn’t ever go back.

This is a tough job, but someone has to do this. It can’t just be about money, even though there’s money to be made with overtime. For me, it has to be about something more because it becomes a big chunk of your life. You have to find your purpose and ask why you are there. What is it you want to get out of it and how can you help others? For me, helping these high-risk kids was my greater purpose.

This really is a thankless job and COs can always use more praise. If morale is low, it makes the job harder on everyone. Praise is not enough, though. There is just no amount of “attaboys” that make this job worth it. There has to be a greater show of appreciation. More time and effort put into training on how to leave this stuff at work and relieve stress would be great and really useful. I think that would help tremendously, but it’s not something that there’s a lot of time and money put into. I understand all the other training is imperative, but it would be nice to see at least an eight-hour block of training to help COs with their mental health and dealing with work stress.