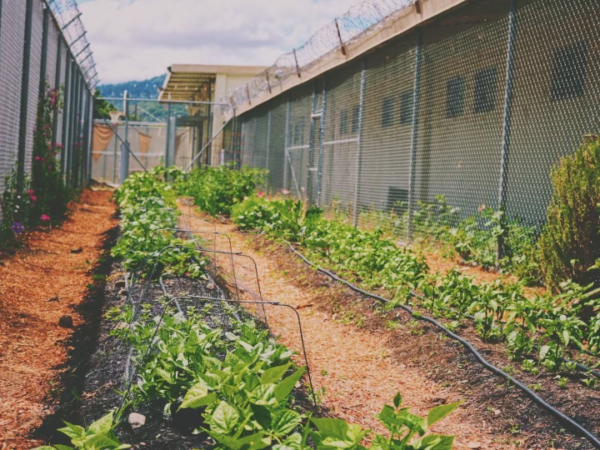 The Unconditional Freedom Project’s mission is to turn prisons into monasteries. We aim to create flourishing members of society by recasting the penitentiary as a place to contemplate and meaningfully contribute. We currently run programs at the local juvenile hall and county jail, as well as the country’s largest women’s prison.

During the pandemic, we developed an 8-week correspondence course in yoga, meditation, and self-inquiry called the Art of Soulmaking (AOS) in which participants explore dignity, personal responsibility, and transforming pain into purpose and forgiveness. Last November we launched our Art of Soulmaking program at the Central California Women’s Facility. Today we have more than 400 participants in eight states, including 81 on death row. The California Department of Corrections and Rehabilitation has just deemed the in-person version of AOS eligible for Rehabilitative Achievement Credits, which means an incarcerated individual may be awarded time off their sentence for their participation in our program.

Across the board, the thirteen graduates of the Art of Soulmaking program reported lower levels of stress and anger upon completing the program. The participants state that stress levels decreased by 28% and their anger levels lowered by 23%. This program is showing a significant impact on mental health, but more than that, some unforgettable moments have come through the work on both sides of the walls. We learned that two family members incarcerated in the same facility, turned to the Art of Soulmaking to work on their relationship. Volunteers are just as affected as the people we serve. One volunteer describes an unforgettable letter she received, “My pen pal and I have been sharing about our mothers. I’ve had a very strained relationship with mine for going on six years, where she doesn’t talk to me at all, no matter how often I reach out. When I shared this with my pen pal, her return letter was so loving, caring — honestly, motherly — that I was speechless. I had a hard time reading and replying to a letter with so much of the very kind of love that I have been missing from my mom. This, and every letter I read and write, always reminds me of some of the ideas at the heart of Unconditional Freedom, that people who we normally disregard as being harmful to society are actually caring and generous beyond measure.”

The Art of Soulmaking program launched at Mendocino County Jail (MCJ) in mid-May and we now have sixty-two people enrolled. Nearly two months ago, we started offering in-person yoga classes to women in the minimum-security housing unit as our first live programming component of AOS. At the beginning of yoga class, we either set an intention or read something from The Art of Soulmaking. Last week we read this Rilke quote:

What is required of us is that we love the difficult and learn to deal with it. In the difficult are the friendly forces, the hands that work on us. Right in the difficult we must have our joys, our happiness, our dreams: there against the depth of this background, they stand out, there for the first time we see how beautiful they are.

One woman asked us to read it again while another shared that she could relate to the quotation.

The women don’t have to be enrolled in AOS to attend the yoga class, but many of them are. When asked how they felt about yoga, some mentioned that it helps reduce their anxiety or improve their sleep.

We made history on July 16th when we had the first official women’s garden crew at MCJ in more than ten years. In our opening circle, both women tearfully shared what it meant to them to have the opportunity to breathe fresh air and sit in the green grass. We cut fresh lavender and tied them in bundles with twine, which we dried in the toolshed and then passed out to jail staff the following week.

Together, the UFP team and six MCJ men’s garden crew members planted more than 1,500 vegetable starts in the summer garden. At the jail alone, UFP staff and volunteers have contributed more than 750 hours of service.

We are building a community of Soulmakers inside and outside of the walls who are discovering how much we have to learn from each other. Mostly the garden is filled with magical moments of harvesting what feels to us like the world’s largest zucchinis, weighing the summer harvest, and snacking on fresh Roma tomatoes and Armenian cucumbers with just the right amount of table salt. Presently, the garden crew guys spend just two days a week with us, so they come out with tons of energy and often detailed plans for what they want to accomplish each day. The jail’s Restorative Justice Manager provides the crew with educational gardening books. Tending the garden at MCJ feels a lot like that Rumi quote, “Out beyond ideas of wrongdoing and rightdoing there is a field. I’ll meet you there.”