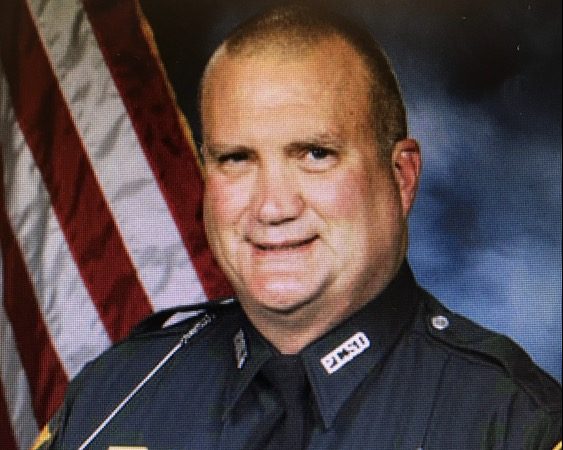 Bio
Married father of five kids, Robert is now retired and enjoying his family time. Robert has his Associate, Bachelor, and Master Degrees. During his service in the Military (1984-2007), he was involved in Operations Noble Eagle, Enduring Freedom, Southern and Northern Watch, and Operation Iraqi Freedom II. For his service, he was the recipient of the Bronze Star and AIr Force Combat Action Medal (17 yrs Air Force and 4 yrs Army). He also served in law enforcement for 28 years as a Bailiff/Detention Deputy Sheriff. He received two sheriff's commendations and one department commendation. He is the author of four books; 'One of the Best', 'The Last Prophet', 'Bailiff', and 'Convoy Conspiracy.'

“It’s tough on your feet, your knees, your back, hips...It takes a toll on you physically. Many COs, myself included, suffered a lot from plantar fasciitis, making it unbearable to be on your feet at times.”

I worked as a Correctional Officer with the Polk County Sheriff’s office for 28 years. I worked in the jail setting for about four or five years, then became a court bailiff for 25 years until I retired. I was in the military for six years active duty and the rest was Army Guard as well as Air Force guard. I was deployed to the middle east seven times. Iraq was my final deployment and then I retired in 2007.

When I was coming off active duty, my brother suggested I get a job as a CO. I knew I’d be dealing with the inmates and had certain expectations about that but I was not expecting there to be so many dynamics with people I work with such as cliques, the good old boy’s system, and that kind of thing.

It takes a real special person to be a Detention Officer, Deputy Correction Officer, or a Prison officer. Being a Correctional Officer is a multifaceted experience. I don’t think anybody just wakes up in the morning wanting to deal with some incarcerated people on a daily basis. I always believed in the golden rule – treat others as you wish to be treated. I always treated inmates with respect and with fairness and I believe that had a huge impact. I thought I had pretty good relationships. A lot goes into how you treat inmates because they can sometimes wind up being your greatest resource. They remember that you treated them well and they see you in trouble and a lot of times they can be your backup when your regular backup isn’t coming.

An example of this was one struggle that was like a whole steel-cage wrestling match. Two inmates had stunned an officer friend of mine. We went in there to break it up and I managed to get the main aggressor under control. I had my head behind his back and when the other officers responded by coming in all full of fire and vinegar, they bum rushed the main aggressor. Because I was behind him I hit my head on the cage and it knocked me out. It was actually the inmates who helped me get back on my feet and they were trying to protect me. When you treat people with respect you get it back.

I liked working the night shift as a CO because management was gone and it was more laid back. We stayed busy and proactive. We were always good about talking to the inmates and being fair. They seemed to respect that we were fair and upfront. You never knew from day to day when you walked in what to expect. For a Correctional Officer it’s never the same. There was always something different going on each day you went to work.

You always are concerned about your safety. One of my biggest rules that I preached and prided myself on was doing what you’re told and that usually meant using your training, following your training, and never letting hesitancy and complacency come into the picture. I was doing homicide trials for eight years as a bailiff. I spent three quarters of my time in felony courtrooms and there’s the heightened safety issue because you had family members, the victims and as well as the person standing trial, and things can get hot and heavy pretty quickly. At the end of the day my greatest concern was a lack of manpower and management. The support of management wasn’t very good when it came to safety.

I’ve been spit on, knocked out, the whole gamut. I was never seriously injured or hurt. It wasn’t the norm every single day to have a violent episode. You had to focus on your presence and demeanor to not show weakness because the inmates would feed on that weakness. But looking sharp and aware and not being sloppy got you more respect. When recruiting Correction Officers, it is important to look at their life experiences and their social interactions with people, not just their academic prowess, but being able to get along with people and interact with them accordingly.

I could think of hundreds of different situations with inmates, some that were pleasurable and those that were more on the unpleasurable side. We always had to be professional, especially on an emotional level. It’s a job after all. We couldn’t let our feelings get in the way of being focused and grounded. When you get into corrections you’re going to deal with a wide range of people and to expect the unexpected because you never know what is around the corner and you’d better be ready.

I never expected I would be exposed to something like talking to an inmate about being raped over a candy bar or a snack cake, you know? Those are the things that are unexpected in this line of work. I knew several officers that took stress leave or light duty for several months. With our agency, if you came and you told them you had some sort of credible drug, alcohol, or psychological issue and you were upfront and honest about it, they would try to help as much as they could within the guidelines that they have to help you with. I know a few officers that got themselves into illegal activities they just flat out shouldn’t have been engaging themselves with, either from inmate relationships or being caught up in something they shouldn’t have been in.

There is a lot of physical stress around the pure workload of 12 hour shifts. You get 12 hours of constant movement. I wore a Fitbit one day and noticed I walked over 11 miles. Between the hours and the intensity, it’s really hard. You think you have a routine going, then a fight breaks out somewhere and you might be doing reports for the next few hours, plus trying to do your regular routine. It’s tough on your feet, your knees, your back, hips… it takes a toll on you physically. Many COs, myself included, suffered a lot from plantar fasciitis, making it unbearable to be on your feet at times.

The job could definitely take a toll on you physically and emotionally. As far as suicides, there’s no one I can recall that went through that but on the law enforcement side I’ve definitely known some deputies that wound up killing themselves. The job can get to you like no other. I don’t think it’s really hard for me to express emotion but a lot of that comes from a faith-based position of being a Christian. There are a lot of spiritual things lacking in a lot of different people. They have physical and psychological well-being but their spiritual well-being isn’t intact.

Some of us who are retired get together now and then and we still have frustrations and anger over the ways things were handled, especially with management. When I started in 1990 the comradery was much better than when I left in 2018. Senior officers got a lot of respect and admiration for doing their jobs for so long but by the time I left that respect was completely obliterated. Plus, management took away many of the perks that came with the job such as having tenure, and the style of management itself shifted and not in a positive way.

In terms of helping the inmates, I’ve seen programs come and go throughout the years. They did a bootcamp for the juvenile offenders to bring them in. That kind of came and went, but it showed that it really didn’t change much of the recidivism. It just made them smarter and stronger to go out and do new crimes and come back in. Then there is legislation, at least in Florida, where they changed the laws around so that a detention facility or a correctional facility wasn’t there for correction or rehabilitation. It was set out to be for punishment. That doesn’t help anyone. There are still programs – GED programs and various types of things afforded to inmates to get involved in but whether that’s helping or not I really don’t know.

When I look back, I think maybe the greatest impact I had with those I worked with is that I made them laugh. I’ve always tried to keep a sense of humor, being able to cut it up, not taking the job so seriously. Like the court jester, I’ve always tried to keep the folks I work with laughing. Sometimes people I knew and worked with will say how different it is since I’ve been gone and how much I’m missed and that although my job was replaceable, I wasn’t replaceable. That was so good to hear.

I am married with five now-grown children and I have many siblings, so I have had a lot of family around for support over the years. That has been a huge help. I like to say that my wife is made of steel, having dealt with my long hours in law enforcement, my deployments in the military, getting my degrees, writing my books and my CO time working weekdays and often on weekends. It has been quite a challenge trying to find that balance between work and family time, so I am grateful for her tremendous patience and her ongoing support throughout the years. It’s because of her I was able to accomplish all that and it means the world to me.