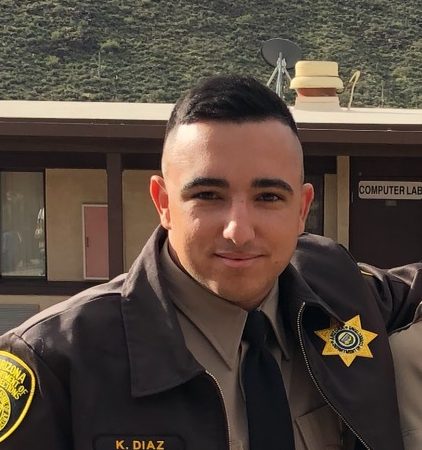 Bio
Kyle now works as a federal contractor in Arizona. His wife still works in Corrections and they have two children, a daughter and a son. He keeps in touch with COs and is always available to talk. His email is diaz.kyle4659@icloud.com.

“I joined Corrections because I thought I could make a difference, and I like to believe that I have. I thought I was going to change someone's life”

I worked for two years at the Arizona Prison complex in Tucson. During my time there I worked at every custody level including level five, where half the inmates were from the general population and half were seriously mentally ill.

I’d been in the Marine Corps before moving to Tucson, and I found that, being fresh out of the military, it was difficult to find a job. I bounced from job to job for a while, until, at the end of 2018, I joined the National Guard and served in the Military Police. But I was still having a hard time finding full-time employment. Then, a Correctional Officer I knew from the Guard recommended that I try it. So that’s how I became a CO.

Starting out, I was very naive. I don’t think I realized how serious the job was or how much danger I was in. It probably took about a month for me to fully understand everything that could go wrong.

One of the first things that got to me was that my sleep schedule was completely turned upside down, because, after my first three days of field training, I was on nights for two years, and I just never got used to it. I was in a dark place. I wasn’t eating, I wasn’t sleeping well. I stopped doing the things I love, and it was particularly tough because about five months after I got into Corrections, COVID-19 hit. I don’t think I’ll ever be the same after working there. I don’t think anyone is, no matter who you are.

In the beginning, I was in charge of 86 inmates. Even on level five, there’s only one floor officer and one control officer per shift, and those inmates could be violent sex offenders, child predators, or murderers, some of whom were in there for life. So you really had to know how to conduct yourself and how to talk to them, because If they think you’ve offended them, they’ll take it upon themselves to do something about it. And it might not even be you.If the officer on the previous shift promised them something, I’d get there and have to deal with it.  Personally, I made it a point never to promise anything I couldn’t deliver. And the inmates, even on level five, knew that. They knew me, and they might not always have liked what I had to tell them, but they knew how I ran things, and they knew I was fair.

During my two years on the job, I never had to use force. I’ve had to go hands-on because of something another officer was involved in, but I personally never had to use force. I never sprayed anyone. Instead, I talked. I was raised by a single mother on the southwest side of Chicago, so I learned not to look for trouble. I learned that you had to keep it real, just be yourself, and know how to talk. So I think that helped me a lot.  And also, I was a problem-solver. If I saw an inmate had a problem or was frustrated about something, my first reaction would be to talk–to get him to explain what had happened so that, together, we could find a solution.

Many of the level five inmates are self-harmers, and I found that I was often able to talk them out of harming themselves. I’d get called in, I’d clear everyone out of the way, and I’d say “Hey, dude, let’s talk about it.” So, he’d know I was there to solve the problem, not to make it worse. He knew I was going to treat him with dignity and we were going to figure it out.

There were a couple of times  when I was on a watch to make sure an inmate didn’t self-harm, and he’d come up to me and say something like, “Hey, I want to, I want to hurt myself.” So, besides going through all the proper procedures–calling for resources, getting the inmate evaluated–I made sure to talk to him: “Tell me what’s going on. What’s wrong, man.”

I understood that these people were criminals, that we were not friends. But we could still talk man to man, because those inmates really just wanted somebody to listen to them. And nine times out of ten that would be enough to talk them down. Just talking to them and showing them that respect. In one instance, someone’s sister had died, and that was upsetting him, but in most cases, it’s just the mental stress of being in prison that gets to them.

I think the thing about these cases that got to me most was how blessed I am to have such a great support system, including my mom, my wife, and my kids. So sometimes I would see these inmates and wonder what they must have experienced to get to this place.  Sometimes it just broke my heart to see these people who had no support system at all, nobody to reach out to. And now they’re probably in the worst place they could possibly be. Don’t get me wrong. I knew they were inmates. But I’m not a judge, and at a certain point I had to stop thinking about what they were in there for.

Seeing all that, working within prison facilities, can get to you. So, for example, the other night I was walking my dog and, for whatever reason, I just got a bad feeling. I got back home and double-locked the door, grabbed the dog and said to my wife ”Let’s get in the bedroom.” This wave of paranoia took over me. I’m lucky that my wife is also a CO, so she understands how it’s affected me. We are able to relate and talk about what happened. I’ve seen some stuff that normal people don’t see, and someone who’s never worked in a prison couldn’t really understand.

When you’re looking through the window of a cell door while you’re doing rounds, you never know what you’re going to find, especially when you’re dealing with inmates who have mental health problems. I’ve done CPR on a dead person and my wife has saved two inmates from hanging themselves. There was one incident when I told someone he was going to have to move to a different room, and he didn’t want to. So I told him that when I came back for my next check, which would be in thirty minutes, he needed to be ready to go. But when I came back, his window was completely covered in blood. I couldn’t even see what was going on inside. That kind of constant anxiety wears on you.

Particularly in my unit, we might have thirteen or more incidents a night. We were always ready to go. So there comes a point when you have to accept the fact that you are in a prison and that’s just the way it is. After a year, I was desensitized to that environment, because a year in a Correctional Facility is like five years anywhere else.

As a result of all that, I’m always on the alert. I can’t turn it off. Sometimes it’s great, because I’m present to my surroundings, but the hypervigilance also has me stuck in my head a lot. When I was working in the system, I never knew when I was going to bump into somebody from prison on the street, and even though I wasn’t necessarily worried for my safety, I just wanted my day off to be my day off. But sometimes the stress just follows you, and that stress will kill you. The average life expectancy of correctional officers in Arizona and elsewhere is dramatically lower than for the general population. And there’s also a high rate of suicide among COs, including one lieutenant I knew personally. But aside from putting you at risk for an early death, I think the constant stress of working in a prison has serious health consequences. Depression is rampant. People get out of shape, they stop going to the gym, people turn to drinking to deal with their stress. It can eat you alive.

When I first got together with my wife, before we were married, and we worked in units that were literally a block apart. We had our difficulties at times. The job just keeps you on edge all the time. Luckily, because my wife is now pregnant with our second child–a son–they’ve moved her to a lower custody unit and put her on light duty. So she never leaves the control room. But, that said, she’s still going to work in a prison. Sometimes she comes home visibly shaken. She’s drained and exhausted, and I try to calm her down, reminding her that she’s not going to be in that job forever.

In my opinion–or at least in my experience–Correctional Facilities need better communication from supervisors on down. As far as providing mental health support for the officers, I’ve had some supervisors who were better than others. So you really need to be proactive about getting the help you need. I believe there should be mandatory mental and physical checkups for Correctional Officers so that they aren’t put in the position of having to ask.

Truthfully, I don’t believe the people in charge really cared about the COs. For example, when COVID hit we weren’t even allowed to wear masks because, we were told, it intimidated the inmates. Clearly, our own health didn’t matter until people started to get sick, and then they wanted to know why we weren’t wearing masks.

I joined the Military and I joined Corrections because I thought I could make a difference, and I like to believe that I have. I thought I was going to change someone’s life, and I think I did. I’ve lost a lot of good friends to prison, to street gangs, and I was able to talk, particularly to some of the younger inmates, and tell them, Hey man, you got your whole life ahead of you. You better stay off the streets.

After two years, I made the decision to leave the job, and I’m happy I did. I’m not as stressed as I used to be. I’ve managed to deal with it. I work more hours now than I ever did in the prison, and I’m fine. I come home from work happy and full of energy.