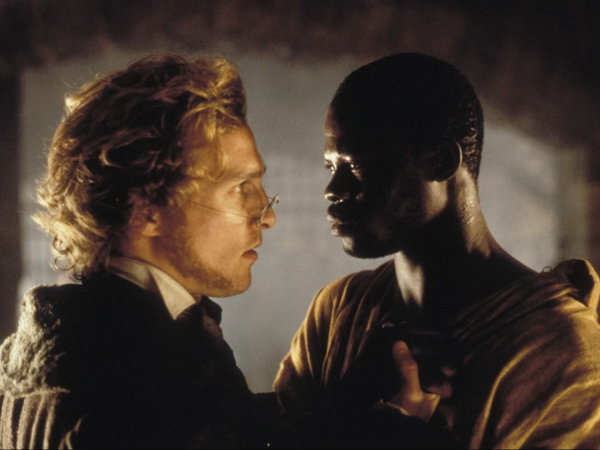 The fluorescent overhead lights shut off as the TV screen flicked on. A grayish-blue tone entered the classroom from the natural light outside, another cool and cloudy day in suburbia Queens. Mr. P’s 7th grade English class was the place of many debates, and on this day my debate was internal.

My mind fills with thoughts as I look out over the sea of light brown desks that were attached to chairs, five rows across and six rows back, all in straight lines. Mr. P decorated the room with posters, my favorite of them had funny quotes from literary classics that were translated into how kids speak today. He did his best to relate and keep us engaged.

To celebrate Black History Month, we were covering works that focused on African Americans. With a category that vast, I was sure we didn’t have to be watching this movie. I winced through the opening scene, a screen filled with blood as rebellious slaves hack to death European captors. Is this what I’m to believe of my two cultures, a constant war with no chance of peace and understanding?

I start fidgeting at my desk, heart racing and armpits sweating. My breathing becomes labored, chest tightening as I quietly hyperventilate. My throat goes numb as it closes around the golf-ball-sized knot that contains the pain and tears of my ancestors. Here I was, the “tragic mulatta” who tried to renounce her blackness in an effort to fit in, having a full on panic attack in the classroom while watching the film Amistad.

I have to get out of here. I stand up from my chair and stomp towards the door but Mr. P intercepts me and asks where I’m running off to. Holding back my tears with every ounce of restraint, I tell him I can’t watch this and I have to get out of here. He does his best to talk me down but I’m teetering on the edge of a public meltdown. I told him the movie was making me sick to my stomach and he argued it’s an important part of “my” history. My eyes look down at the floor, flickering with rage as I raise my gaze to meet his. I told him he doesn’t know the first thing about my history or where I come from, and I followed that up with calling him a racist. 20 years ago, a comment like that from an upset kid didn’t hold much consequence but in today’s world, it would be enough to get you canceled and destroy life as you know it. My mother was called to pick me up and I was ushered to the front lobby to wait for her.

She pulled up in her blue jeep, platinum blonde hair set it its Farrah Fawcett feathered style as she peered over her glasses with that concerned look on her face. We didn’t talk right away, and then I walked her through what happened. Her eyes changed from green to grey as we spoke, they reminded me of a mood ring because they often changed with her emotion. I envied how her eyes did that.

“I couldn’t watch it, mommy. I always think of papa and grandma Teal and uncle George when I see something about race where black people are harmed. I don’t understand why people would treat us that way.” This is where she would normally give me an inspirational speech about being proud of who I am and where I come from, proud of my caramel skin and my chocolate brown eyes, proud of my curves and the strength my body possesses. Instead, she said, “Movies like that upset me too, and I understand why it’s hard for you to watch.” My mother – whom I always felt so different from, the one I only looked like when you paid close attention to the features behind the color – fully met me that day. I revealed my heart and she received it, and the illusion of separation melted before my eyes.

The car pulled up to the courtyard of our co-op apartment, bright green grass surrounded by sparkling concrete. As we approached the door she asked me in her thick Brooklyn accent, “So what do you wanna eat?” Her Italian love language felt nourishing in the midst of my black struggle, and I noted the moment of union between my two worlds.