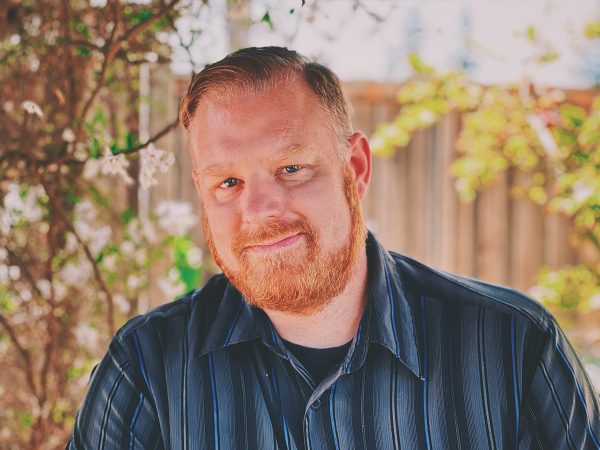 Bio
Chris Bowser joined the U.S. Army Reserves in 2008 at the age of 23. He spent 10 years at this and left due to a severe neck injury that made it to where he was unable to perform basic soldier tasks and drills. While exiting he was hired by the Department of The Army as Civilian Law Enforcement, during this time he also went back to school. After leaving all forms of Law Enforcement for good, he went into restaurant management. After spending 3 years in that field, he was fired due to the Covid-19 Pandemic. He was soon hired by the non-profit The Living Room to be the Director of Operations. This is where he currently works. He loves hiking, cooking, collecting records and his 3 children.

“I will never fully understand why we had to view them as a number instead of a person.”

I had wanted to be a police officer since I was in 3rd grade, but I was not able to get any traction in my adult life. I made the decision to join the army in 2008. I was 23. When I signed up I wanted to be Law and Order Military Police, these are the ones that most echo the real life police officers. However, I didn’t know the difference between job codes at the time, and I ended up accepting the job code for an Internment Resettlement Specialist, which is a way to say Correctional Officer. I was still an MP, just not a “real” MP. I was shipped out to South Carolina for my initial Basic Training. After completion I was bussed to Ft. Leonard Wood, Missouri for my Advanced Individual Training.

Training was intense. The job had recently been created because of a few scandals in the overseas facilities. Highly trained Military Police officers had conducted inhumane acts against prisoners of war (P.O.W’s). The three that were referenced and taught most were Camp Bucca, Guantanamo Bay and Abu Ghraib, however we were shown various pictures of other oversea camps that were experiencing similar issues as well as a fairly in-depth explanation about the “Torture Memo’s”. As such, the Correction position was put into place to offer additional and more specialized training in the realm of human rights, cultural awareness and interpersonal communication skills (IPC skills).

I was a part of the second class to go through the program. They had not worked out all of the issues yet, however it was overall good training. We learned how to use all manners of less than lethal weapons. First we would learn and then we were shown what it was like to have it happen to us. We were tased, pepper sprayed and had various grapples and strikes used on us. These were all attempts to teach of the severity of our actions when we use them on those in captivity. We also learned restraints, riot formations and basic first aid. There were issues still, the dichotomy of learning how to talk to prisoners like people while maintaining a strong outward appearance was difficult, more so if you factor in that at 23, I was one of the oldest people in my class.

Upon graduation I returned home and was sent to assist on a mission not within my job code. I was going to work as a real MP conducting Area Security operations. I was very disappointed when I learned what an area security MP did. It wasn’t much. I was attached to a federal police station along with 3 other soldiers, later expanded to 6 total.  My job consisted of sitting in a police vehicle and checking fence lines and working the gates. The department was small, only 18 officers. Of those 18, 1 was female. I believe that because of the lack of actual policing to do, the department often experienced infighting, squabbling and personal fights. I was shocked that fully grown and professional men would act like this. Going from training to this real world situation was difficult, professionalism is a hard trait to qualify, but noticing the lack of it is easy.

After I had completed that mission I was sent to Guantanamo Bay. This was the first time I had worked inside of a prison proper and  had the opportunity to use the training I received. I was sent to a camp that had various high end detainees in it, people that were from the Taliban and Saddam Hussein’s personal advisors. When I first arrived I was trained by the outgoing unit. They had a level of closeness to the detainees that I was immediately uncomfortable with. They had developed nicknames for the prisoners and refused to use their numbers to identify them. The detainees would not respond to their numbers either.

We were informed that this camp was different from other camps. As such our training would not be as useful. We watched them shake the detainees’ hands, give them items that were on the contraband list, share personal stories and treat them like equals in many ways. This shocked us and our leadership. We trained for 1 week before the other unit left to demobilize. Our leadership put an end to this lack of boundaries right away. A memo was drafted explaining that they would be enforcing the Standard Operating Procedures to the letter. Speaking with the detainees about anything personal, using names on either side (we had badge numbers), lack of restraints while moving detainees would all be punishable offenses.

The Army has an interesting approach to leadership and who writes the rules for inside the jails. My commander was not a trained correctional officer, no officer had that job specific experience. Instead, they went through a general leadership course for Military Police. I don’t know much about this course, but I do know they have some training in all aspects within the 5 functions of the Military Police Corps. Also, whereas the lower ranker officers would work in the jails, mostly as the final say in situations, unit commanders did not. There was a building several miles away with offices and secretaries that was for the unit. I can count on one hand the amount of times I saw our commander inside our walls. They drafted the new rules for the soldiers and we are expected to follow it. We had supervision and expectations so we followed. The detainees fought back. Pushed against us with this stiffening of the rules and were, understandably, upset with the direction their home was taking. They began to hunger strike, refused medical treatment, and would take all of their items from their huts and take them into the communal living area.

This made for a serious rift between leadership and soldiers. The day to day of working the jail had gotten much worse, yet we were expected to hold the standards presented by our commander. Several soldiers were punished for using nicknames for each other to the detainees. Examples being “big guy”, “potter” and “mustache”. My nickname was “Koopa” due to my last name. Once we were found to be using this instead of our last 4 badge digits we were reprimanded. Many of the soldiers didn’t like the tone that we were pushing. Several wanted to be harsher and were outspoken about who we were there to watch.

The casual racism inside of an Army detainee facility cannot be understated. Terms like “Hadji”, “Bomber” and “Debt” were thrown around very casually. Discussion of what they had endured at the hands of the FBI, the Navy and the CIA were used as a punchline. We were often told to remember that they were the “enemy” and they were not harmless. “They would kill you if they could” was told to us very often.  Many in my unit knew soldiers that had been injured or killed, this added to the frustration and anger. This lasted until I was taken off of the island with an injury. I left before my unit was moved. I was told that the rules stuck and the situation never got better. It was a difficult time for the soldiers who wanted to do it for the right reasons. It was more difficult for the ones who wanted to do it for the wrong reasons.

I transitioned back to civilian life and got a job working Federal law enforcement. I became what I learned to dislike early in my career. It took me about a year to realize that law enforcement wasn’t for me. I learned that it doesn’t matter what side of the gate you are on, it’s a hard life when you have nobody. All you have is people that don’t know your name, people you are told are the enemy every day. It makes both the detainees and the soldiers on edge. Constantly waiting for something to happen and being told by leadership and trainers that there will be an event and that remaining vigilant is the only option, but it never does. The prison I was working in was on an island thousands of miles from where the war was. There is no escape planned, most of our detainees couldn’t even swim. I will never fully understand why we had to view them as a number instead of a person. The old adage of being trapped together was apt here.