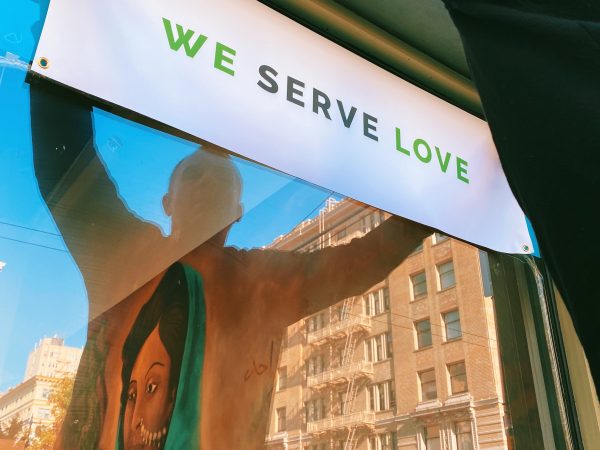 Love To Table started with one woman’s vision of a world where the true nature inside each of us could be revealed.

She recognized that we are all on a path, and regardless of the different places we’re at on the path, our humanity is constant throughout. She had learned this experientially herself, from having hung out on the streets of the Tenderloin. She knew that among the people without homes existed a rich love and community, one mostly overlooked from the outside but deeply felt by anyone able to drop in below surface appearances. She believed the truth of humanity emerged irrespective of circumstances, and yearned to create a world where each person’s true nature could be seen.

This woman also knew that any efforts to do good or help others could not come in the form of a handout. She dreamed of delivering love, dignity and recognition in a way where each person could remember their value and humanity, and ultimately contribute to the world. She envisioned a beautiful kind of exchange. Rather than a top-down handout of an offering where the giver is superior, she recognized that all of us, regardless of status or growth were empty in some places and overfilled in others.

Looking out at the trees weighted down with apples in her garden, she realized food could be the vehicle of this exchange. Food is the most basic nature of humans. It is the easiest way to relate. Nothing brings us back to ourselves like food.

She had a garden and we, her neighbors, had a garden, and both were tended to and harvested with the utmost care. Using this produce, already so imbued with love, we could cook food so every single bite would transmit the deepest nourishment. Even more, rather than do it haphazardly, she envisioned a Michelin star restaurant. To provide a world-class experience and give the utmost dignity to the guests, those individuals who inhabited the Tenderloin.

In this exchange, we could share our overflow of vegetables to empty us for more flow. And those whose bellies would be filled by these vegetables had something to offer as well. Thus the food wouldn’t be delivered with a “Bread of Shame” feeling or with superiority, but as an exchange of essence. One group was offering the essence of our homes, of our nature, of our gardens, of our kitchens. And the other group was offering an expression of growth.

The growth could come through a contribution of a poem or art, through service at the restaurant, or it could come through demonstration that one is growing even inside of the Tenderloin, where it seems so little grows. You can go to a yoga class, a meditation, or a recovery meeting and get a chip for anything that you contribute, as long as it is an expression of your essence. And no one can decide what that is except you. The exchange happens without fostering a kind of inherent dependency. Rather it is an expression of your basic value being on the planet as who you are.

This woman had gotten sober. One day in a 12-step meeting she heard another woman say, “If nobody told you today they love you, well I love you!” So everyday she would go to that meeting and she would wait for that, she would wait for that little drop of love. And that’s where the idea of Love To Table came. Fundamentally, no matter what is going on with anyone, that’s what we’re waiting for, that one drop of love. And that is what’s being delivered, that’s what’s being served at this table – Love.